“He groomed me to succeed him,” says John Robbins, heir to the throne of Baskin-Robbins Ice Cream. “I walked away from the company and his expectation for my life.”

As a child John Robbins was paralyzed from polio and wheelchair bound for some time. He was left with more feeling in one leg than the other and one leg three inches shorter than the other. He was told by doctors that since his growth years were completed he would just need to cope. Through proper whole foods, heavily plant based diet including grass fed, grass finished meats and yoga that eventually turned to running he changed his medical prognosis.

Robbins then exchanged the life of ice cream stores for the opportunity to promote a whole foods diet which avoids sugar at all costs.

In 2010 John Robbins wrote, “Ben & Jerry’s gets all their milk from dairies that have pledged not to inject their cows with genetically engineered bovine growth hormone (rBGH). Why, then, can’t Haagen Dazs, Breyers and Baskin-Robbins do the same?” He added, “Ice cream giants Haagen Dazs, Breyers and Baskin-Robbins continue to use milk from cows injected with rBGH, a hormone that’s been banned in Canada, New Zealand, Japan, Australia and all 27 nations of the European Union.”

In his post he points out the use of rBGH creates an increase of udder infections for the cows which in turn increases the use of antibiotics in the cows. The result is an upset in the human gut flora which causes health issues in those drinking the antibiotic laden milk.

Robbins interviewed a veterinarian on the topic of antibiotic use in cows milk where he asked, “Does the increase in udder infections have an effect on the milk, and thus any ice cream, cheese or other product made from it?”

Dr. Richard Burroughs a veterinarian deeply familiar with rBGH answered him saying, “It results in an increase of white blood cells, which means there’s pus in the milk!” The antibiotic use, he adds, “leaves residues in the milk. It’s all very serious.”

What was unexpected for Robbins was his emotional attachment to ice cream. He says, “I ate a tremendous amount of it growing up. We had an ice cream cone shaped swimming pool in our back yard. We had a commercial freezer in our home with all of the 31 flavors that were in the stores.”

“I developed this profound attachment to ice cream. What I do now to satisfy those urges is I eat things like fresh fruit or pieces of dark chocolate and sometimes I’ll blend up a banana with avocado and cinnamon.”

On rare occasions Robbins admits he’ll indulge in a coconut based frozen dessert but ice cream is something he no longer eats.

Robbins is a key organizer in the push to get GMOs labeled as such.

Robbins says, “I know for me trying to bring love into my relationship with food has meant not eating any animal products that are produced from factory farms because of the level of cruelty in animals that’s inherent in those production systems.” He adds, “It’s just totally incongruous, totally incompatible with love as I want to live it.”

He goes on to say, “Eating food from a tropical country, I always get fair trade if I can. And I get organic when I can and it’s not just to spare my body residues of the pesticides, that’s important, but I’m also thinking about the farm workers. If there’s pesticides used in the production of the food, it’s the farm workers who are most exposed to the sprays and those toxins.”

His heart goes against big business and capital greed saying, “I know about the inequities economically worldwide. I know how coffee growers are treated and bananas and cocoa perhaps worst of all by the multinationals who really are thinking only about profit and squeezing their supply chains to the maximum they can. By buying Fair Trade I’m taking into account the well-being of the person who grew the food, or the chocolate, or the coffee that I’m eating.” 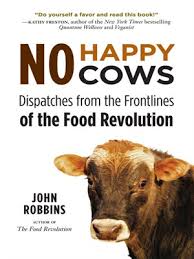 Robbins emphasizes, “That’s important to me!”

It’s so important to him, he wrote about it in a book entitled, No Happy Cows: Dispatches From The Frontlines Of the Food Revolution. To read a free clip from his book click here.

In his youth he says food was absolutely a reward, specifically ice cream. He says, “Ice cream played a huge role. I identified with celebration or reward or relaxation. If we wanted to treat ourselves, if we wanted to be good to ourselves, we go to high sugar foods.”

The industries that run our food system is Robbins’ biggest concern.  He says, “The poor in this country are eating the cheapest calories they can get. Meanwhile the companies that manufacture these processed manufactured foods do so with the explicit intent of promoting ever increasing consumption of the food they sell. Their strategy is to add sugar, salt and fat in order to set in motion an addictive response in the body.”

*Nourishing Plot is written by Becky Plotner, ND, traditional naturopath, GAPS who sees clients in Rossville, Georgia. Since her son was delivered from the effects of autism (Asperger’s syndrome), ADHD, bipolar disorder/manic depression, hypoglycemia and dyslexia through food she continued her education specializing in Leaky Gut and parasitology through Duke University, finishing with distinction. This is not a news article published by a paper trying to make money. This blog is put out by a mom who sees first hand the effects of nourishing food vs food-ish items. No company pays her for writing these blogs, she considers this a form of missionary work. It is her desire to scream it from the rooftops so that others don’t suffer from the damaging effect of today’s “food”.

Teenager Goes Public On What It's Like With Food Struggles