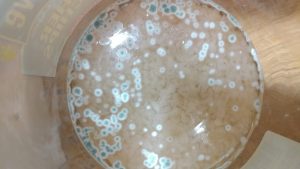 Social media is filled with people saying if your sauerkraut grows mold, throw it out. Sometimes this is good advice, most often, it’s not. Wasting money is not the goal.

James Townsend, specialist in life practices during the 1800s says, “If you ever find mold growing on the top of your sauerkraut, all you really need to do is scrape that moldy part off, resubmerge your sauerkraut, keep percolating. It. Will. Be. Fine.”

Sandor Katz, Father of Fermentation says in his book The Art of Fermentation, “Surface growth is common and normal; it should be removed, but it is not cause for alarm and it does not ruin you fermenting vegetables.” pgs 103-4.

He goes on to say, “To get rid of surface growth, gently remove weight from the ferment. Use a wide stainless-steel spoon to get under the mold, and skim it off as best you can. Sometimes it is not possible to remove all the mold, because as you attempt to remove it, the mold dissipates and little bits are left remaining. If this happens, remove most of it, as much as you can, and don’t worry. As long as mold is white, it is not harmful. If other color molds start to grow, do not eat them. Bright colors often indicate sporulation, the molds’ reproductive stage. To prevent spreading the spores, gently lift the entire mold mass from your ferment.”

This is where some people say, throw the ferment out; however, this is not what Katz says. He eats it saying, “Remove mold or other surface growth, as best you can, as soon as you notice it. After removing mold, evaluate the texture of the underlying vegetables. If the vegetables near the surface have been softened by mold growth, remove and discard.”

Wild Ferments, a California company that specializes in fermented vegetables says, “We often hear stories of people throwing away whole batches because it smells or looks bad at first sight. We have found beautiful kraut under a moldy maggot-infested top layer – it was delicious. People should know that an offensive odor often decreases and sometimes even disappears once a crock is packed into jars and refrigerated.”

Dr. Natasha Campbell-McBride, author of GAPS, agrees saying, “I would scrape it off and eat what’s below, particularly if it goes blue. You know what helps with all ferments, I find a leaf of horseradish on top, cabbage works (also). Horseradish! When you put horseradish on top, there will be none of that film on top. Just the leaf, horseradish. Grow it in the garden, it’s so easy to grow!”

Dr. Natasha was shown this jar of fermented vegetables that had a solid inch and a half of white hairy mold growing on top. The cabbage leaf that covered the top of the kraut raised up and out of the brine, exposing it to oxygen, and grew mold on top. When fermenting vegetables are exposed to oxygen, they mold. This is the jar from the top view. 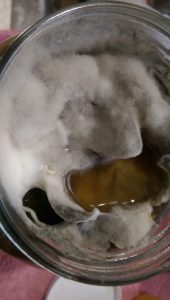 When shown this jar, Dr. Natasha said, “Oh, that needs to be removed completely.”

She was asked, “Removed and thrown away, and eat what’s below, or throw the whole thing away?”

Dr. Natasha replied, “You can eat probably what’s…. taste it. Scrape it off and eat what’s below. You probably need to remove that much (a few inches). Because it will be slimy…”

Monica Corrado, MA, CNC, CGP said, “What ever’s slimy, throw out.” Corrado is a Teaching Chef to The Weston A. Price Foundation and for the GAPS Protocol.

The picture below is the side view of the same jar. This jar is the perfect example of the worst-case scenario when it comes to a moldy ferment. Looking at the jar, a cabbage leaf, which covers the vegetables to keep them submerged under the brine, is visible 3/4 of the way up the jar. The leaf is about an inch thick. On top of the leaf is another leaf which has lifted out of the brine, showing a space of air, then white mold, then more leaves and more white mold. 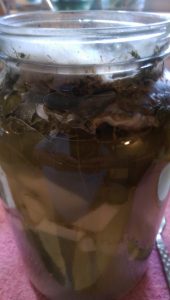 When showed the side view picture of the jar, Dr. Natasha said, “Oh my, up to here needs to be removed (just above the halfway mark, where the color is still lighter) and possibly the whole jar thrown out.”

This gives us a fuller understanding of what is acceptable for consumption.

When asked if kahm yeast on the top can be scooped off and thrown away, the answer was the same. Kahm yeast  is a white film, sometimes grey. The picture shown below, viewed from the top of the jar, has kahm yeast on top. 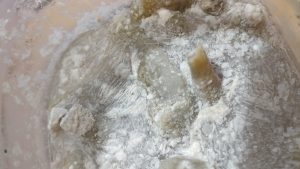 This picture below is a side view of the same jar. 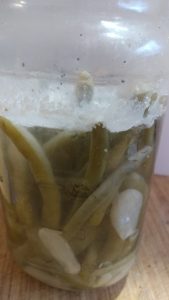 Regarding kahm yeast like this Dr. Natasha says, “Scoop that off and throw it away. Eat what’s below. When you make all your ferments, even your pickles, put a leaf of horseradish on top.”

When asked, “Can you stick a rock from the garden in there?”

Dr. Natasha says,  “You can. Wash it off. What I do, you see, there used to be these bread bins, made out of clay with a heavy lid on top. I do my ferments in there. Then I put a leaf, and a plate on top of the leaf, And then I put an empty glass jar, I find the right size of it, a glass, put it like that, the lid goes on top. The plate is underneath, the lid pushes the whole lot down. Even in glass jars, I put a little glass jar, a kind of shot (glass), I put the lid on and the lid holds it down.”

The best way to avoid the whole issue is to seal it up and submerge the vegetables below the brine, which is the best way to eliminate the exposure to oxygen. Many folks cover the top of the vegetables with a cabbage leaf, some use a crock rock to submerge the vegetables further or even just a small glass. Others use air extractors in the lids. Some use fermenting weights. Some use advanced airlock systems. Some use airlocks and weights together. Others just use airlocks. There are hundreds of ways to ferment, all work. It doesn’t need to be expensive, it doesn’t need to be complicated. It just needs to fit your lifestyle.