Leftover green tomatoes, at the end of the season, are a nuisance if you don’t like fried green tomatoes. This blackberry jam recipe uses green tomatoes and tastes so good you may just plant more tomato plants to get more green ones!

This recipe has a lot of forgiveness. If you have more tomatoes, the recipe can take it. The numbers are a rough guide. Sweet isn’t our thing so we go with less honey. Adding twice as much honey is closer to the taste of  jam found in the store.

{This post may contain affiliate links which pay for this site}. 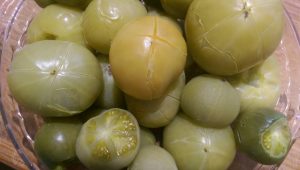 Score roughly six cups of green tomatoes on the bottom and cut the core out of the top. Place the tomatoes in boiling water until the skins tighten and pull apart as shown in the picture. Remove the tomatoes from the water, peel the skins and chop, or not, your choice. We are only removing the skins, the seeds from the tomatoes make the jam a raspberry appearance, without the teeth capturing hard seeds. 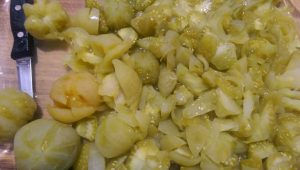 Place the tomatoes in your Vitamix or food processor. 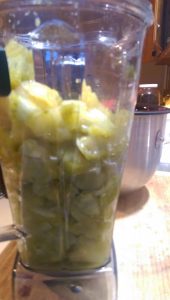 In a dutch oven, over medium heat, place three 18 ounce packages of blackberries, like the ones from Costco. Mash the blackberries, with a potato masher, as they slowly heat. 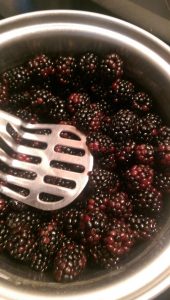 Continue mashing until the blackberries are are in a liquid state. 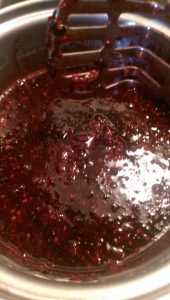 Place the blackberry contents through a stainless steel mesh strainer until all of the hard seeds have been separated from the blackberries. 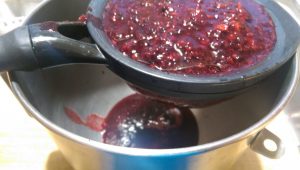 In the Vitamix or food processor add tomatoes and blackberries and combine the particles are mixed but the seeds remain. The more you blend, the more the seeds disappear. Return the mixture to the dutch oven and continue heating the strained mixture, add 3 tablespoons of Great Lakes Gelatin in the red can, sprinkled thin, stirring as combining. Add three cups local honey. Stir until combined. 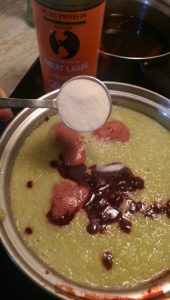 Once the mixture is combined it can be poured into sterilized mason jars. The easiest way to do this is to put the jars in the dishwasher, on the hottest setting, having them finish when you are ready to pour the jam into the jars. 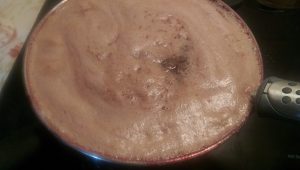 Pour the mixture into sterilized jars through a funnel, preferably one that is stainless steel. 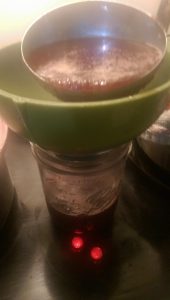 Wipe the top of the jars clean with a clean non-terry cloth towel. This is so the lids make a good seal. Using new lids is the safest way to prepare the jars. 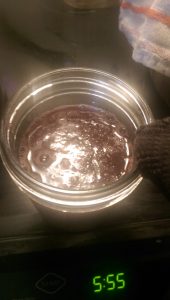 Line the clean dutch over with a rag. 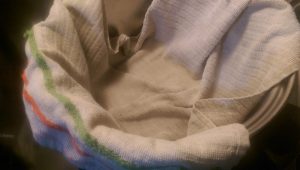 Place the jam jars with the lids finger tip tight into the dutch over, separated with more rags so that the glass jars are not touching each other. If they touch each other, the glass hitting glass while they boil will cause the jars to break. 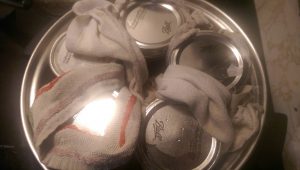 Pour warm water, touch temperature roughly the same as the jar temperature. If you pour cold water into the pot, the temperature change, cold water on hot jars, will break the glass. Pour water up until the top of the jars. The jars should not submerged by roughly an inch or two of water. 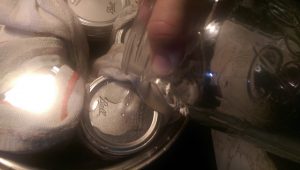 Boil the jars on a low simmer for 10 minutes. Remove the jars and place on a terrycloth towel. Removing the jars is easiest done with canning tongues. These tongues are covered in green vinyl protecting the jars. If a jar does not seal, refrigerate and enjoy first. 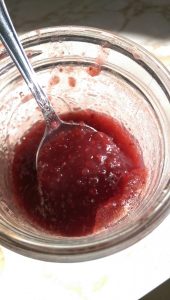 The other canned jars are shelf stable and make fantastic gifts. 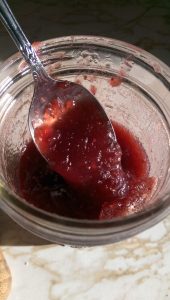 This recipe makes a delicious sauce over Pumpkin Donuts. 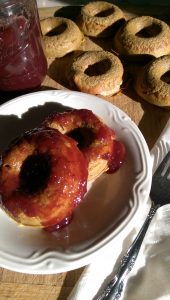