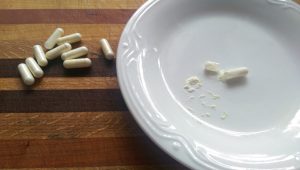 Alpha lipoic acid, ALA, is an antioxidant made by the body when the body is in a healthy state.  ALA is different from vitamins A, C and E, in that it has a negative charge, causing it to attract heavy metals to it, and then escorts them out of the body. This makes it a compelling chelator.

It is recommended that the GAPS Protocol alone is used for at least two years prior to chelation. Each person is bioindividual and should be treated as such. Dr. Natasha says, “GAPS programme is a journey, some people find that they get better quickly, others need more time and other interventions, such as chelation of heavy metals. Consider GAPS programme as a basis for your recovery, a foundation of your health. For many people GAPS is all it takes to get well. For others, after building the foundation, they have to build other structures on top of it to get completely well.”

Dr. Natasha used to say the detox channels are opened with the GAPS Protocol, which takes time. “I do not recommend any other detox procedures for the first two years of the programme, as the GAPS Nutritional Protocol will restore your own detoxification system in the body, so it starts functioning again and removing toxins naturally.” However, she now says chelation protocols can be started much earlier, even within the first year.

HMD, Heavy Metal Detox, used to be recommended on GAPS. As of 2018, Dr. Natasha no longer recommends HMD.

Seaweed intake on GAPS can be done in many ways, including: seaweed snacks like this one, this one, or this one, kelp, dulse, alaria, chlorella and spirulina as well as others. Pushed quantities of seaweed, in order to chelate are not recommended on GAPS as high levels in bursts is known to redistribute metals.

There are many ways to chelate while on GAPS, alpha lipoic acid is another, and is often chosen by GAPS people due to the small price tag and clinical effectiveness. One bottle of clean ALA is roughly $13.00 and will allow the whole family to chelate each person for their whole lives.

Scientific World Journal says, “Alpha lipoic acid is a powerful antioxidant that regenerates other antioxidants (e.g., vitamins E and C, and reduced glutathione) and has metal-chelating activity. Both fat and water soluble, it is readily absorbed from the gut and crosses cellular and blood-brain membrane barriers. Clinical experience is that it must be used carefully as it poses particular risks of redistribution of metals.”

This can happen due to improper dosage or usage.

A popular method of chelation using ALA, the Andy Cutler Protocol, is highly effective for many. For folks who have damaged microbiomes, GAPS people, the use of ALA needs to be carried out according to what supports the microbiome while chelating.  The Cutler Protocol involves any form of over-the-counter ALA, along with any companion nutrients which should be supplemented while chelating including zinc, magnesium, manganese, B vitamins, chromium, vitamin E, vitamin C, vitamin A, selenium and sometimes others. While on GAPS, these supplements are acquired through nutrient dense GAPS protocol foods. Added ingredients are to be observed and avoided with utmost importance while on GAPS due to their potential to feed pathogens in the microbiome.

This ALA is compliant with no added ingredients. Each capsule is 300 mg, however, when simulating dosage of ALA similar to what the body would make, the amount the person takes is low and frequent. Most GAPS folks, with deeper damage to the microbiome, start with one speck of ALA, put on the finger and swept through the mouth where it is absorbed by the mucous membranes, every three hours. This is continued through the day and through the night for three days. This is considered a round and is repeated every week, three days on, four days off, making note of yeast flares.

Heavy metals are said by some to be encompassed with yeast, where the yeast wraps around the metal like a comforter. This yeast will not leave, no matter what you do, because it’s protecting the body from the heavy metals, doing its job. For a person in this situation, without chelation, yeast will continue to flare, even after diligent effort of not feeding the yeast and taking therapeutic probiotics to drown out the pathogens. When the metal is removed, the yeast that surrounded it is freed and free flowing in the body. If too many metals are removed because of too much ALA, releasing too much yeast which can not leave through the urine, stool and other channels fast enough, it’ll be trapped, recycling in the body. This is dangerous redistribution of metals.

Too much yeast in the body, from too high of an ALA dose, causes yeast symptoms which is most commonly seen as offgassing ethanol, an alcohol. These symptoms resemble a drunken person: laughing, giggling, smiling inappropriately, clinginess, “I love you Mom!!!!!”, bumping into walls and door frames, anger, snappy behavior, excessive dark circles and/or puffiness under the eyes, fits, tantrums, erratic behavior that makes mom want to hide in her room for a break as well as other symptoms. If this happens, the amount of ALA is too high and should be reduced until the yeast behavior is gone. If the yeasty behavior isn’t seen, the amount of ALA should be increased until the yeast is seen, then reduced to just below the yeast signs. This can also redistribute metals.

It is important to be sure the bowels are moving daily while chelating as the metals need to exit. If constipation is an issue, there are many GAPS methods to assist. If the person has amalgam fillings, ALA should NOT be used as the chelator as it will pull the metals from the largest store in the body. Chelation is not recommended for pregnant and nursing women.

Day one: wake up and take the first speck at six am, nine am, noon, three, six, nine, midnight, three am, six am, etc.

Setting your alarm a cellphone, for the three hour mark, is easiest to follow. Often times when people set their three hour alarm on a microwave or oven timer, it is missed because they are in another area of the house. If a dose is missed, which will happen because humans make mistakes, the dosage can be taken up to the fourth hour, but not past the fourth hour since the metals will officially be dropped. Some people on ALA choose to use this 4 hour rule during the night so that they can get more sleep in one stretch. This is fine, but the dose should never be given over the fourth hour.

If it is past the fourth hour, the round should be stopped and resumed again after 4 days have passed.

While taking ALA on GAPS, if nutrient density and proper food nutrition is taken, then the companion nutrients are satisfied through food. This includes at least three pastured egg yolks a day, preferably six (some see great success with a dozen or more), pastured organ meat every day, lamb at least twice a week, pastured animal fat every day, kraut juice to maximum tolerance every day, and Brazil nuts (2-8 according to FDA findings).

If the amount of kraut juice is microscopic, due to die off, supplementing with vitamin C is helpful.

It is important to work with a knowledgeable practitioner while chelating, for many reasons, including stress on the liver.

The FDA says, “Dental amalgam contains elemental mercury. It releases low levels of mercury in the form of a vapor that can be inhaled and absorbed by the lungs. High levels of mercury vapor exposure are associated with adverse effects in the brain and the kidneys.”

They go on to say, “Bioaccumulation refers to the build-up or steadily increasing concentration of a chemical in organs or tissues in the body.  Mercury from dental amalgam and other sources is bioaccumulative. Studies of healthy subjects with amalgam fillings have shown that mercury from exposure to mercury vapor bioaccumulates in certain tissues of the body including kidneys and brain.”

Poison Control, National Capital Poison Center, at Poison says, “In 2007, the National Center for Health Statistics reported that 111,000 adults said they used chelation therapy, along with 72,000 children under the age of 18. It is highly unlikely that 183,000 US residents required chelation therapy for the limited number of approved indications. Chelation therapy as a treatment for autism is based on the erroneous belief that mercury in childhood vaccines is a cause of autism.”

Their summary is, “Based on erroneous theories of disease causation, some practitioners advocate chelation therapy for such conditions as cardiovascular disease, autism, and Alzheimer’s disease. There is no scientific basis for these expensive treatments, which expose patients to risks without benefit.”

There are other methods of chelation while on GAPS, but for the sake of length of a post, will be discussed later.