“We as humans, are hosting a number of parasites. It depends on which one comes as a clinical picture. If you go deeper, you’ll find out the same person is also suffering from other parasitic infections,” says Leonard Mboera, PhD and Research Scientist at the National Institute for Medical Research.

Established in 1979, the National Institute for Medical Research has over 600 people as permanent staff and over 1,000 as project staff. Their main focus is parasites, specifically malaria. They are currently realizing there is a relationship between malaria as well as helminth infections at the same time. Helminths are parasitic worms which mostly live in the intestinal tract and can be seen by the naked eye. They include tapeworm, flukes and roundworm species. In the tapeworm category there are 6,000 known species that infect humans. In the fluke category there are 15,000 species which infect humans and in the roundworm category there are a million known species. These include the commonly known flatworm, liver fluke, lung fluke, intestinal fluke, pinworms, tapeworms, whipworm and roundworms, to name a few.

Some are attached to the human with suckers, others with a small beak that contains hooks and still others with lips and teeth. They attach, with these apparatuses, to feed. They lay anywhere from 3,000 to 700,000 eggs a day, depending on their species. Some of them lay eggs up to six times each day. Some eggs have one larvae while other eggs have 250,000 larvae each.

“The children that are the age of going to school, these are the ones who are mostly prone to helminth infection,” Mboera says. They are tested using fecal samples, urine samples and blood samples. In the study, they tested 500,000 school aged children.

A great number of the children had anemia, presumed to be from malnutrition. Mboera believes the parasitic levels correlate with the socio economic level of their parents. Some parasitologists say these parasites can cause anemia because they love and eat your iron. These children are in Africa, where outsiders send mosquito nets to resolve the problem for them. Mboera says this is not the answer.

“People are using their mosquito nets to do other things: fishing, gardening, they put them as clothes nets, a variety of activities. Why? It’s not their priority preventing malaria. It takes time to show them it is better. Sixty percent of their diseases are environmentally related,” Mboera says.

He says interventions need to be rethought.

Here in America, for the most part, people think they are not suffering from parasites. However, practitioners will tell you everyone they put on an antiparasitic, passes parasites in the stool. This includes children, as well as, adults.

“We don’t screen our children for (parasites). In this group of 580, there were about 4 with clinical malaria,” he says. This means of the children with a parasite or multiple parasites, were functional and going to school.

There are many over the counter products that can be used as natural anti-parasitics including increasing garlic consumption in food, berberine products,  Food Grade Diatomaceous Earth, antiparasitic tinctures, (or this one),  Oil Of Oregano, and Mimosa Pudica. 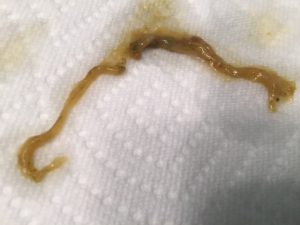 Chelating With ALA While On GAPS