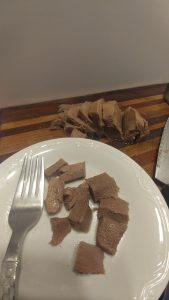 Tongue is one of the most amazing dishes that, if you can handle the concept of what it is you’re cooking, will be many delicious meals. It’s the kind of meal that makes you wonder why you’re cooking it, but after you taste it you’ll wonder why you haven’t been eating it your whole life. It’s easy to cook. It’s moist and tender. It’s tasty and filling. The best part of all, it’s extremely easy to cook. Organ meats such as liver, heart, kidneys, gizzards, brain or whatever you can source, ounce for ounce, are the most nourishing foods, packed with sustenance.

Beef tongue is commonly used in Latin American dishes. Beef tongue is high in every amino acid, zinc, iron, phosphorus and potassium. It contains all the B vitamins but is high in B 2, B 3 and B 6 but is exceptionally high in B 12.

People that don’t like liver often really like tongue. Sourcing it is done by finding a grass fed beef farmer. It can be purchased for a few dollars as it’s often a cut that is thrown discarded. If you have a friend who is getting a half or whole cow processed, you can ask them for the tongue as most folks don’t use it. In the animal the tongue doesn’t just sit between the teeth, it goes all the way down the throat. The greater portion of it lies in the back of the throat and down the throat. Some meat processors don’t cut out the whole tongue, but instead just pull the tongue out and cut off the tip, giving you about five inches of meat instead of roughly 14 inched long, five inches thick. 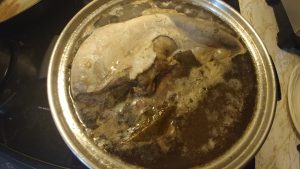 To make tongue place it in a dutch oven pot. In the picture above, there is also ox tail to fill the spaces of the pot in order to make a delicious meat stock. Add two tablespoons of mineral salt, a tablespoon of crushed peppercorns and four to five bay leaves. Fill with water until just submerged. Bring the pot to a boil over high heat. Just before it’s boiling, there will be a film or foam on top- scoobage. Scoop this off with a slotted spoon and discard. Once you’re done scooping of this foam, it should be at a full rolling boil. Turn the heat down until it’s a low simmer, often this is the lowest setting on the stove. Cover with a lid and cook for three hours. 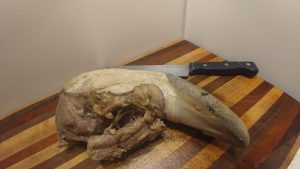 Remove the tongue with a pair of tongs. 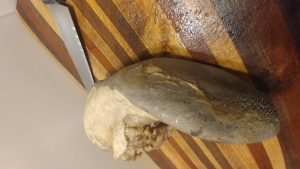 The concept that this is a tongue is hard to take for some, avoid looking at the taste buds if that’s the case. 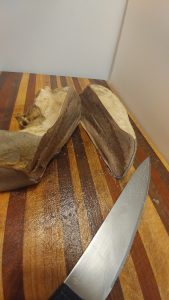 Slice the piece in half. 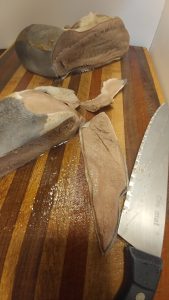 Shave off the skin with a serrated knife. It should slice through like butter. If it is tough and hard to cut, it’s not done cooking. Once the skin is off, cut into slices and chop into cubes if desired. 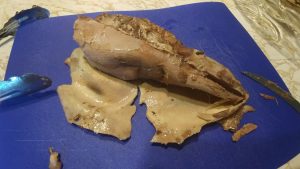 If cooked long enough, the skin will often peel right off the meat. 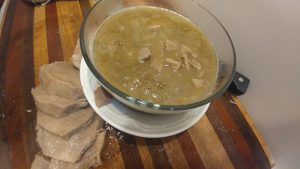 Enjoy as  you would a piece of sliced roast or add to soups. It can be used as you would use ground beef or pot roast. Once the tongue is done cooking, the liquid in the pot is a delicious meat stock that can be enjoyed in a cup or made into soup. If you have a strong enough stomach to avoid the fact that it’s tongue, you’ll be greatly satisfied with this inexpensive, easy to cook, delicious meal. It’s truly a delicacy.