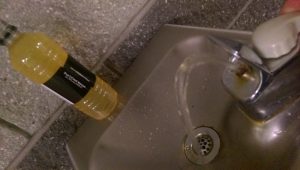 Water from a water fountain is a gamble, at best. It is often contaminated with chemicals such as chlorine, fluoride, mold and rust. When we’re out and about, in a pinch without quality filtered or spring water, it’s best to drink water that’s available than to become dehydrated. Observing the water fountain for certain signs can tell you whether it’s safe to drink or not.

The above photo is from a water fountain in the Georgia Dome, three months prior to its scheduled demolition in March of 2017. The Dome was built for the 1996 Olympics held in Atlanta. The Dome was 19-years-old at the time of this rust contamination. Dome authorities did not know the age of the fountains.

Staff simply said, “It’s been happening for a long time. Rust. I wouldn’t drink that.”

The Georgia Dome is being replaced with the Mercedes-Benz Stadium, a facility that will seat more patrons and contractually give the Georgia Falcon’s Football Team rights to parking and concessions. 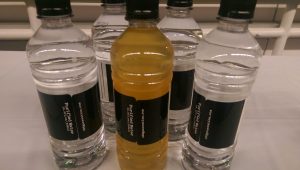 Generally, it’s possible to smuggle outside water into a function, however, this event was a different story. The three day event lasted 16 hours each day with great physical exertion and a clear bag policy to help enforce the no outside food or drink policy. Upon entering The Dome, five security guards used a wand on your body, patted you down and inspected your bag.

Concerns over healthy fountain water is not new. School children are at risk every day.

“In 2007, Baltimore City public schools switched their entire system to bottled water after a study of 84 randomly selected water fountains found 10 with lead levels high(er) than the EPA’s cutoff of 20 parts per billion. The school district decided it would be cheaper to provide bottled water than testing and remediation efforts,” reported National Geographic during and shortly after the above fountain was put into the school buildings. 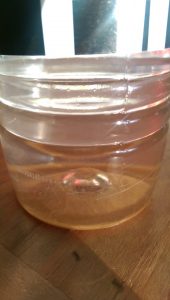 After the water settled, rust accumulated in a thick layer on the bottom of the bottle. 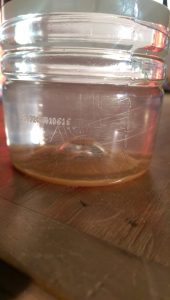 Looking back on the original photo, this is not the first time rust has been present in the water.

Notice the brown coloring on the faucet where the water comes out, as well as near the base of the fountain head.

Looking at the water fountain before you drink may save you from further toxicity when you’re in a pinch needing water. The Georgia Dome, and other stadiums like it, have a strict no food or drink policy. No outside food is allowed in the stadium. An empty water bottle can come into the stadium, but nothing full is allowed. This leaves the person stuck.

Looking for brown staining, mold or excessive wear from corrosion can save you from water fountain toxins. To read more about moldy water lines click here. 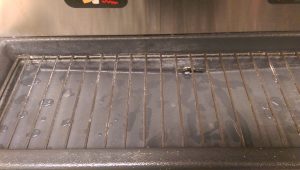 These two water and ice machines were shockingly located in Erlanger Hospital, sixth floor, in Chattanooga, Tennessee in October of 2016. This is the ice and water given to sick patients in order to heal their bodies from surgery, trauma or chronic disease. 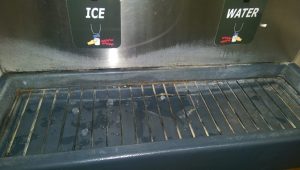 Carrying a portable water bottle that has a quality filter is a smart option for clean drinking water. This BPA free water bottle contains a filter that states it removes the dangerous ingredients in water, all except fluoride. To read more about BPA contamination click here and here.