“Cancer can’t live in an alkaline environment,” is a common phrase heard today. The same is said for other diseases. This belief has many people adding baking soda or apple cider vinegar, with the mother, to their water or lemon juice making it an alkaline environment, where, supposedly, disease can’t grow. The same belief is true of adding white vinegar to herbal tea to form an acidic environment.

The pH of your body shows an alkaline or an acidic state, a simple chemical state that has been believed to make you healthy or sick. For the great majority of people an alkaline state makes them feel well, while an acid environment does the opposite.

However, many practitioners in the natural field, are stepping forward saying that’s just not true – you can’t change the acidity or alkalinity of your body overall. The body does what the body does no matter if the food is alkaline or acidic.

Personally, I began to question this theory years ago while in natural health school, studying enzymes and alkalinity. Testing your pH with litmus paper tells you the acidity of your urine. If you were acidic, taking a mineral would balance you while if you were basic taking another mineral would balance you. Trouble was there are two zones to test: saliva and urine. Each one of my testing zone was the opposite of the other, each on the most extreme end of the spectrum. Moreover, taking the appropriate mineral to balance my pH did nothing. Taking more did the same, nothing.

Truth be told my son had chronic croup as a young child. He was rushed to the emergency room more than once for low oxygen levels due to his struggle. His reliance on steroids wasn’t normal, but it was our normal. Croup continued to return over, and over again. Doctors were stumped because we brought him back to their office, with a horrific case of croup, three days after he finished his steroids. They were baffled because, as they put it, the steroid stays in the body for 11 days after you start taking it, making him impervious to another round of croup. Yet, there we were with croup again, four days later.

We had a perpetual cycle of steroids living in our house. We traveled with a mini cooler filled with the medicine in case an episode occurred while we were out of town for a couple of days. We began using a breathing machine filled with steroids to get the medicine directly to his lungs. 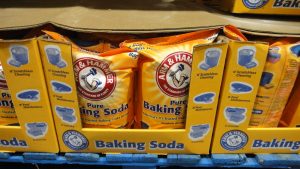 He didn’t get better, instead, he apparently got worse. When he woke with scary barking noises he began to turn blue and bubbles formed at his mouth. Specialists thought his throat was collapsing, triggered by the croup.

Nothing worked, until we made magic lemonade, a homemade brew of baking soda and lemon which turned the water fizzy like a soda. It worked. The croup subsided. This carried us through many bouts of croup. We were thankful to put a stop to the oral steroids. That is, until it didn’t work anymore. The dosage of baking soda kept getting higher and higher, yet it was becoming less and less effective.

It took a major diet change, through GAPS, and rebuilding of his system for the trouble to go away, but the pH adjustment wasn’t a solution.

Most knowledgeable people can tell you cancer is treated best in an alkaline diet, but specialists on this point are speaking out, it’s not the case.

“What’s baking soda? Sodium bicarbonate. The sodium in the bicarbonate simply can not be done in conjunction with the Gerson Therapy. We’re trying to eliminate sodium from the body, not introduce it,”says Dr. Patrick Vickers (2:09) from Gersontreatment.com. Vickers resides in Mexico where he runs the Northern Baja Gerson Center. For a time, during his training, he lived with Charlotte Gerson before she passed where he studied Max Gerson’s notes that filled boxes upon boxes.

Chris Wark, of Chrisbeatcancer.com, says, “There’s a lot of people online talking about doing this baking soda protocol. It’s kind of one of those magic bullet, alternative therapies, that usually don’t work for people.” (2:10).

Dr. Natasha Campbell-McBride, author of GAPS, discussed this topic at the Annual Weston A. Price Conference, 2015, in Anaheim, California. She said, “The body will switch to what it needs so supporting the system is best, it will repair itself. If you feed it a lot of baking soda it’s fine for a short period but long term alters the terrain of the microbiome for the worse. Candida is there for a reason. That reason should be the focus.”

She further went on to say, “Parasympathetic and sympathetic often are seesaws together, working together. Even your thoughts can change your metabolism. PH can change, checks and balances all change what you need when. If your body and state is incompatible, that food can damage you. It depends on your body’s state. A piece of meat can make you alkaline and vice versa for other foods. The body will do what it needs. Everybody has senses to determine what you need nutritionally. If it smells good to you, eat it. If it’s repulsive don’t eat it.”
There’s a difference in adding apple cider vinegar to your water for assisting digestion, so that you can absorb more nutrients, vs adding it to change the alkalinity of your body.

The Unspoken Dangers of Amalgam Fillings