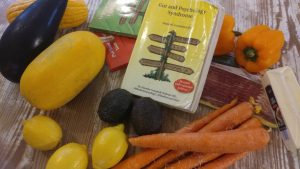 Finding a protocol like GAPS can be daunting. The program addresses issues like autism, autoimmunity, ADHD, FPIES, Crohn’s, celiac, IBS, fibromyalgia and many more challenges which are sourced in the gut. The issues are addressed knowing all disease begins in the gut – an adage which has fallen to the wayside, leaving people saying, “The medical community has failed me.”

GAPS stands for Gut and Psychology Syndrome, a book written by Dr. Natasha Campbell-McBride, who was trained as a Medical Doctor and had a thriving practice as a neurologist and neurosurgeon when her son was diagnosed with autism. She saw her field failed her and could not help her son so she began studying natural remedies, specifically food, to support his body.

Finding yourself in the same position is becoming more normal by the day. We find ourselves in a time where it’s hard to find someone who is truly healthy.

Looking into GAPS can be scary as it takes a lot of work from the caregiver. For some, it’s too much of a commitment. For us, we considered our time caring for an autistic, ADHD, dyslexic and hypoglycemic young child, who would some day turn into a teenager, and then who would progress into an adult. We were in a situation that was bleak. He needed constant monitoring. He needed attention that was not just patient, but was able to take a beating. Picturing this scenario with a teenage boy surging with hormones, then a young man in his 20s who could rationalize lost ambition, then a man in his 30s who was stuck inside his head yearning for independence, then a 40-year-old man who had a mind of his own and couldn’t control his body…. it was no comparison to spending time for a few years cooking and watching him recover. In our position, our options were thin. It was time to do my Mommy Job.

We started GAPS when GAPS wasn’t a known option. When we began our journey over 12 years ago, GAPS had been on the market a few short years and was still gaining popularity. In fact, the internet itself was still gaining popularity! Today a mom can do a quick search on GAPS and find out information in a split second. Our days were not so fortunate. We were trapped in the cycle of doctors appointments and waiting on specialists, only to find ourselves spending over $700 in one summer in just co-pays, back in the day when co-pays were $25 and deductibles were rare. While waiting for appointments, we hit our knees. There have been many times in our lives when we prayed and the answers came many months later, or worse, they never came. In this case, when we prayed for the health of my son, reaching up to find answers as to what was causing the problem and what would fix it, every time the answer came almost immediately or within the day – every time. We found ourselves on Full GAPS, because they were the only foods which didn’t cause our son to act a fool, like a ballistic maniac having a violent breakdown of sanity.

Three years later we heard about GAPS, so I ordered the book and cried page after page. I told my husband, “This is it! She writes about what we have been through, what we found! She explains why and how, she names the pathogens!” It was a refreshing relief and I felt home. I’m thankful we were so sick that we didn’t have a choice. I’m thankful there was no internet posts that led me astray or caused fear. I’m thankful we just went to work.

Now, today, this same young man who was a ballistic tornado on an striking disturbed rampage has no diagnoses. He spends his days cutting down trees with a chainsaw, driving himself to Youth Group, putting up drywall after taking down dated wood paneling, putting oak planks on a decorative ceiling and building remote control airplanes from broken appliances. At the young age of 16, I don’t consider his safety for a second, my thoughts can only think of what can I ask him to do next, he’s so good at it! If anything goes wrong, or we need something, he’s the first one we call upon.

For those on the journey today, support is easily found.

It’s humbling to be surrounded by genuine and authentic people, like Jo Whitten from The Wellness Coach. When she asked me to do a podcast with her, I was honored, as I know her journey has been a long healthful battle. Doing GAPS is hard. More and more folks are getting sick every day. Some folks show a gradual slow and steady decline while others have a sudden onset health crisis.

Click here to hear the first podcast interview explaining a full review and how GAPS works while understanding your potential game plan.

Click here to hear the GAPS Q & A that will hopefully answer your burning questions.

Letter to Establishments For Bringing in Outside Food