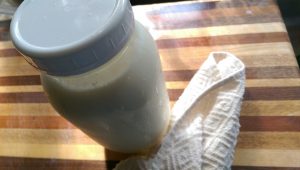 “There’s a pretty good group of people out there that want to put people like us out of business,” said Brad Bleasdale, pastured goat milk farmer in middle Tennessee.

When the farmers returned the call to the Health Department investigator, the investigator replied one month later with an email. followed up with an email. This was a red flag to the farmers. If there was someone sick from their milk, their concerns were immediate to protect others from potentially getting sick. A return email a month later showed no concern for health issues. In his email they requested a list of the farmers customers, all the information they could provide. Their request was stern saying, “You are hereby directed to produce this list.”

The farmer’s lawyer reviewed this request and found it was illegal.

Milk contamination was of no concern to the state, instead the farmer’s contact list was the objective.

Immediately after the sickness was reported, the Health Department got a sample of the milk from the sick customer’s home, which was tested at a later time.

The farmer’s wife said, “If I thought our milk was making our people sick, believe me, I would jump all over it – not wait a full month.”

The farmer sent emails to their farm members, asking politely if they wanted to have their names provided to the state. Only 25% of their customers replied with a yes, give them my name. Some customers told the farmer they offered their contact information so they could chew out the Health Department in a don’t tread on me manner.

As time passed, the farmer was told the milk in question came back with a positive result of Cryptosporidium.

The farmer’s wife knew that Cryptosporidium abounded in contaminated swimming waters, since she grew up in Florida. She wasn’t aware of Cryptosporidium in farm situations so she began searching scientific abstracts, mostly from CDC experts. She said, “This changed the entire landscape of the investigation. In one weekend our posture changed from one of being defensive to one of confidence and determination.”

The farmers were never provided with the names of The Unknowings, the individuals who became sick. However, the week following the initial notification from the Health Department, at the farmer’s market, the family, The Unknowings that got sick, came to pick up their regular milk order. They never stopped drinking their milk and didn’t know anything was happening to the farmer. The Unknowings had no idea the farmer was in the fight of his life or that the situation was dire. It was causing enormous concern and stress for the farmer and his family. They were overwhelmed with concern. All members of the family were having a difficult time sleeping. The situation was causing division with the farmer’s extended family members. Annual family gatherings weren’t happening due to the division. They weren’t talking to each other as usual, they weren’t gathering over broken bread, laughing and playing. Stress was at an all time high.

At the farmer’s market, the Unknowings said they had just returned from a vacation to Florida where they spent a lot of time swimming in the natural springs. In The Unknowing family, the mother and father were both dentists, they were highly educated people. A teenage daughter in the Unknowing family got violently ill from their travels. The Unknowings took her to the doctor where she was tested and found positive for Cryptosporidium, a situation that requires notification to the Health Department.

At the doctor’s office, the Unknowings were asked two questions. The first was, “Have you been swimming lately?” The second was, “Do you consume raw milk?”

They answered yes to swimming but when they said yes to the raw milk question, the nurse stopped the interview, picked up the phone and called the Health Department immediately. The health concerns of the raw milk was the focus of their investigation, even though the likelihood of contamination was from the swimming hole.

When the farmer’s wife began aggressively researching the CDC website, she found eye opening information. Cryptosporidium is a protozoa, not a bacteria or virus. They lay millions of eggs. If you get these eggs on your mouth or other area of your body, you can get Cryptosporidium introduced to your body. If you have a compromised immune system, the odds are higher that you will receive a problem from the Cryptosporidium. The reports explained an initial test will almost always come back positive because almost every home carries Cryptosporidium as we all poop in our homes which creates airborne molecules. This first test result is almost always very shocking and scary.

The CDC reports explained the species are not zoonotic, meaning they can be transferred from farm animals to people.

C. muris can inhabit adult cows but doesn’t inhabit a human as the host. Cryptosporidium parvum can infect humans and cows, but not an adult cow. It only infects calves from about three weeks of age or older.

This was a great relief to the farmer as the farmer sells his calves at 2 to 3 days of age, they do not keep calves on their farm. The farmer said, “It was a scientific impossibility for our milk to be the source of contamination. We presented all of this information to the state.” There was no possibility that the health concerns of the raw milk from the Health Department was valid.

The Health Inspector at the Health Department was an epidemiologist, he should have known this information.

Nonetheless, the state continued to send emails to the farmers, persistently and consistently asking for the list of their milk customers.

The farmer found out when the state comes in to test milk on a farm it is testing for enzymes in the milk. If there are enzymes present, it tests positive for growth. The milk must test safe, meaning there are no enzymes present, specifically the milk is dead. “Then it’s safe,” he said. The only way to make milk dead is to boil it to a high temperature.

The farmer further researched and found the CDC did a study on raw milk safety, which spanned the course of 13 years, from 1987 to 2010. Issues weren’t found.

This wasn’t the case with pasteurized milk. In 1985 the largest food borne illness of the country happened. Jallisco Cheese had an outbreak which sickened hundreds and killed 50 people.

In 2015, Blue Bell Ice Cream had an outbreak where 10 people were reported ill and hospitalized over four states. Three people died.

This milk was all properly pasteurized prior to human consumption.

Raw milk sales and cases of sickness from the CDC didn’t exist. Accusations from the Health Department did.

The farmer in this case won. The state backed down, but no apology was ever made, no correction in the newspapers was reported, no correction on the television was broadcast, no facts were reported, only the unfounded accusations remained public. What did happen was nearly a year later, one senator from their state tried to propose legislation making raw milk sales illegal. When consumers sent emails and called his office he changed his angle and tried to propose a bill saying farmers had to have all their customers recorded with the state and have regular inspections for presence of microbes. When this was met with emails and phone calls from voters, he tried adding it to another bill to get it to pass. The legislator was a medical doctor who was adamant that raw milk made people sick and killed people.

The above farmer told their story at the annual Weston A. Price Conference in Baltimore, Maryland. They are salt of the earth people, friends to this author. We are living in a time where we need to be savvy, we need to know the facts, not mere accusations. Farmers work every day of their lives, sacrificing more than us non-farmers can ever imagine. They get up before the sun, and are on call every day, day and night, for a sick animal, a lost animal or a animal stuck in the process. Our food sources should be local, from a farmer we trust. Be wise, be alert, and for Heaven’s sake, if it’s not food, don’t put it in your mouth!