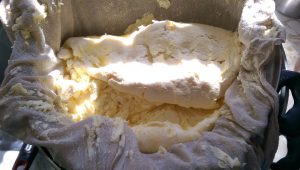 Cream cheese is a traditional probiotic food which feeds the good microbes in our intestinal tract. It is easy to make and delicious! As with anything, the first time you do it, it’s a bit daunting, but after that you wonder how you thought it was so hard in your head. Making cream cheese is equal to making yogurt or milk kefir, in terms of difficulty. The process is simple, you bring raw milk up to a little bit of room temperature, about 85 degrees, add a starter, let it sit, strain and enjoy. Boom! Easy peasy.

The difficulty with store bought cream cheese is not just the fermentation process, it is also the added ingredients, such as gums, which wreak havoc on a declined ecosystem in the microbiome.

Cream cheese, in the GAPS Protocol, is a more advanced food since it has a higher casein structure, not simply paracasein. Finding a clean enough starter, for what your body can tolerate, may be the biggest challenge, such as this one which contains corn and other chemicals, yet those who can tolerate it are fine. This one is highly recommended and has no added fillers. This one is also great.

If using organic store bought milk, heat it up in a stainless steel pot to 180 degrees, cool to 120 degrees, and follow the same instructions. This pot has an accompanying strainer that would be helpful. This thermometer is useful. For a richer, cream cheese, add more cream to the milk. Sprinkle the starter into the milk, one serving will ferment one to four quarts, depending on the starter. After the starter is sprinkled into the milk, take a wooden spoon or stainless steel spoon and plunge it up and down 15 times throughout the pot. Do not actually stir the mixture. If you feel like you haven’t done enough to incorporate the starter, you’ve done it correctly. 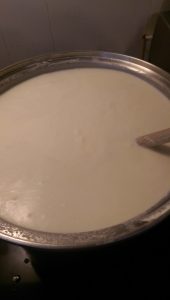 If the pot is full to the brim, criss cross painter’s tape or carpenter’s tape over the top so the covering towel doesn’t fall into the fermenting milk. 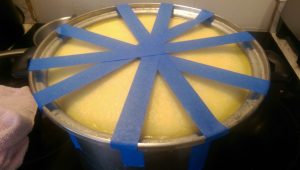 Place an old cloth over the top of the pot and secure it in place with a rubber band. 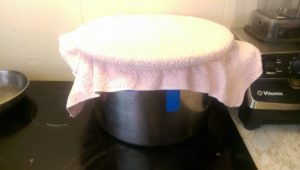 Let the pot sit according to the package directions, 12 hours. If you let it sit longer, it will digest more of the lactose and convert more casein to paracasein – however, it will still sit longer, fermenting further, as the whey is strained. The longer it ferments, the more sour it will become, 12 hours for the initial sitting period and 12 hours for straining gives a smooth end product. The pot doesn’t need to be checked at all, just ignore it.

When finished, remove the towel and tape. Place a large bowl on the counter, then place a colander in the bowl. Secure an old cotton cloth over the colander and pour the contents from the pot into the colander. 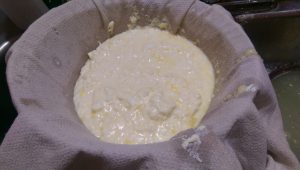 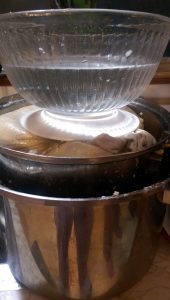 Let the weights sit on top of the tied up mixture until the proper amount of whey has been strained out, roughly 12 hours, however, the towel used and weights used make a difference on the straining time.

Cheesecake, cream cheese stuffed jalapeno poppers and anything else you desire will be a new household treat.

The Relationship Between Magnesium Deficiencies and Parasites