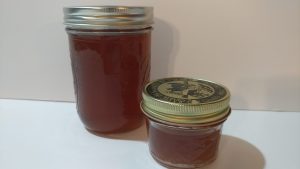 Tapping maple trees for maple syrup isn’t just restricted to sugar maple trees. Any maple tree can be tapped for sap. In fact, even walnut trees and birch trees can be tapped to make syrup. The process is easy and fun. It doesn’t cost much to tap trees and collect syrup, but it takes time. If the trees are larger, you will get more syrup faster. If it’s enough harvest for a single family’s consumption, the process doesn’t need to be large scale and is absolutely doable.

Since Nourishing Plot posts about GAPS approved supportive help to the body, it’s imperative to say maple syrup is not part of the GAPS protocol. Maple syrup is too processed. The ratio to make maple syrup is 40 to 1. This means, if you collect 40 gallons of sap from the trees, once cooked down, you will have one gallon of maple syrup.

Tapping maple trees can be elegant and expensive or very conservative. 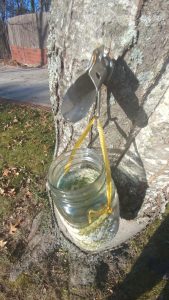 The most economical way to do it to whittle taps out of a piece of wood, or spend $5 for a stainless steel tap online. Tubing can be connected to the tap and run to jugs are even across the whole yard and into your sugar house. Tubing that runs from the tree to the ground involves plastic, however, studies show plastic leaches at warm temperatures or acidic environments. Sap tapping includes neither, however, the choice is yours.  Tapping the tree is done with a simple drill bit. It doesn’t need to be anything specific, but does need to follow the same rules of drilling screws. Be sure the drill bit is not too large. Just because someone tells you a certain size drill bit is used for tapping doesn’t mean that is the size of your taps.

Some folks get buckets that have lids due to rain or snow. Keeping these elements, as well as debris, out of the sap is important so that the concentration levels are correct.

The jars shown above and below are mason jars sitting in a crocheted snuggle (made for me by one of the all time sweetest girls in all the land!) which allows you to drink hot liquids in a mason, then used Christmas ribbon to hang it from the hook. Boom $5 and done. Rain gets in, but we don’t get much rain during tapping time so we just empty the jars when the rain comes and dump it out after the rain is finished. With smaller containers, you dump the sap frequently as it fills the container, but the cost is low. Swanky buckets that hang from the tap hooks can be stainless steel or food grade plastic, whatever you’re comfortable. Large scale production often uses tubing strung from tree to tree, but it doesn’t have to be that involved. For harvesting enough maple syrup for just your family, it doesn’t have to be that complicated.

If the tree is 36 inches in diameter, which roughly means, an average sized adult man can hug the tree and his fingers meet when he’s wrapped around the tree, that tree can handle two taps. Roughly half that size tree, one tap. A bigger tree can handle more taps. When the temperature goes below freezing, the sap climbs high into the tops of trees. When the temperature warms up, over freezing, the sap runs down the tree and will flow out of the tap. It is best to tap on the South face of the tree, around waist height or three feet up the tree. Each year, the new tap should be placed at least six inches from where the previous taps have been placed. It is not optimal to tap in or next to a knot, a few inches away is fine.

The sap will run slower on cloudy days and faster on warmer days. It will drip. 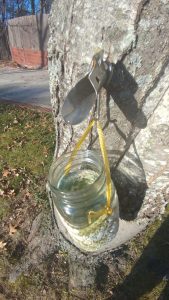 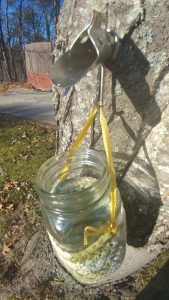 Once you have harvested enough, it’s time to start cooking. Fresh sap from the tree should be treated like raw milk. Refrigerate it and use it, don’t let it sit around forever. Five quarts of sap fit into a Dutch Oven pot and cook down to half a cup of syrup over roughly eight hours. The larger the pot, the longer it takes to cook down into syrup. Five gallons of sap will cook down into one pint of maple syrup in roughly ten hours.

Since the Dutch Oven size is wide for such a small amount of sap, once it cooks down to a few inches in the pan, transfer it into a smaller pot, so that it doesn’t burn.

It will take hours, upon hours, upon hours to cook down to an inch or two and then will quickly burn so be mindful. If it burns, the house will smell great for days, but you’ll also be scrubbing your pot for days. 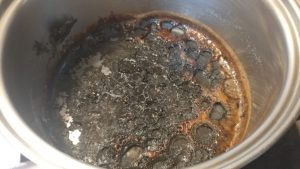 More sap can be added to the pot as it cooks down. 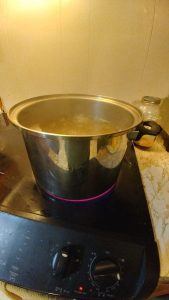 Once it cooks down, a smaller pot can be used to reduce the risk of burning. 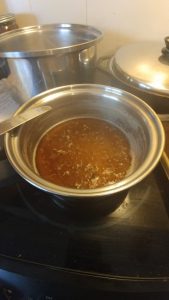 Larger amounts of sap can be cooked outside in a turkey fryer. Inside on the stove a stock pot handles large batches. Commercial producers build sugar houses on their property where they have a large cauldron heating syrup. Once syrup starts running, when the temperature is right, it usually runs for about five weeks.  If the temperature goes up and down, fluctuating below and above freezing, the sap will run on days where the temperature is right and stop running on days that it is too cold.

Nothing is added to the syrup. Just the sap is put in a pot and cooked. Normal boiling temperatures, such as 212 to 280 degrees, are appropriate for making maple syrup. Pushing the heat to make the process go further carries the risk of fire, where the syrup reaches its flash point at 400 degrees. 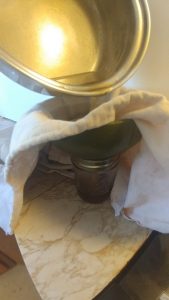 Pour the syrup through a filter. Some use cheesecloth, others use old cotton, whatever kind of filter you use is fine. 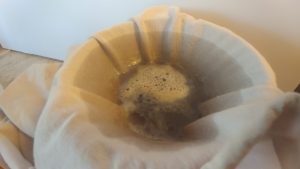 Once it is filtered, put the lid on and enjoy! Your tongue’ll be so happy, it’ll jump outta your mouth and slap your eyebrows! 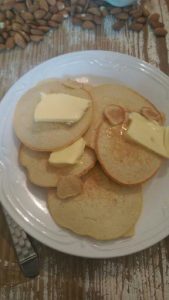 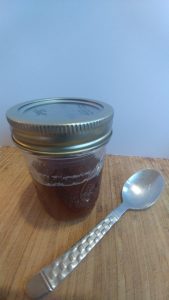