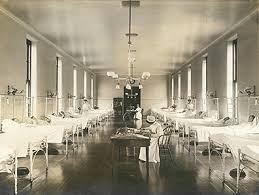 In 1906 hospital protocol called for a clean environment and a Diet Table that makes this foodie’s heart jump. London Hospital, is derived from personal memoirs, diaries, newspaper articles, hospital records and letters. Diets Tables listed, “No extras may be added.”

Food consisted of a Bread and Milk Diet, Diet Number 1 and so forth. 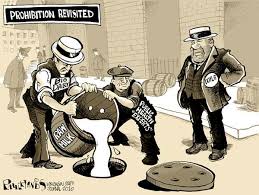 The Bread and Milk Diet was 7 pints milk, 6 oz bread and pudding. Supper was, “Cocoa, or Porridge or Gruel.”

The main purpose of this diet was for intake of bread, cocoa and egg.

The Foundation Diet used as a baseline was 3 eggs, 1 pint milk and 6 oz bread. Bread in 1906 was a different bread than what we see today. The nutrient density of bread was high and nourishing, not stripping like the product we see today.

Another healing diet option was milk only, spaced throughout the day.

The milk served was raw milk full of nutrients and good bacteria.

One patient’s food order on the Diet Table was bacon, pudding and brandy.

The London was known as, “The most advanced hospital in Britain.” People waited outside the gates until the hospital opened in the morning. Advanced techniques like x-ray machines were cutting edge. Expectant mothers knew one out of every five children were dead by their fifth birthday. The average person lived to be 45.

People died from infection, pain was eased with morphine and antibiotics didn’t exist for another 40 years. Working in the medical field was a dirty job. It was also a dangerous job. 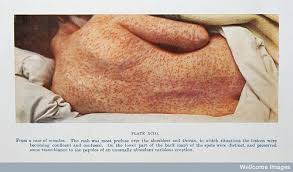 Workers could contract infections and airborne illnesses while patients died from measules, TB, scarlet feavor and typhoid. Nurses worked 14 days straight with a break on the 15th day.

Hospital staff began their day with prayer. Brooms, mops and clean zones were upheld to the highest standard. If a patient contracted a MRCA equivalent disease linens were burned, rooms were sanitized top to bottom, entire wards were closed and the head nurse most likely lost her job for unsanitary conditions.

Most importantly was cleanliness and nutrient dense food. These were the ingredients for healing.

Tips For Getting the ADHD Kid To Do School