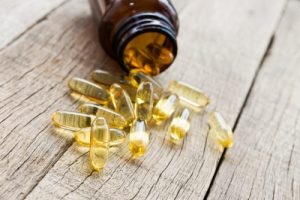 First, it is important to choose quality oils. Most marine oils are a sourced from farmed fish. It is important to note, as stated here, when a farm raised fish is ill, floating belly up, it is picked out of the water and relocated to be processed as fish oil. The fish used for oils are the rejected fish, the fish that are noticeably dying. Using these fish for marine oils is a wise financial move for the farmed fish industry, it raises profits out of waste material.

When health is an issue, it is recommended to source the best quality nutrition to support the system. Farmed fish does not qualify in the this category. Wild caught fish is the optimal choice.

As you progress through a healing protocol, the body speaks to you, telling you what to do, telling you what it needs. When you support the body properly during these times, it can repair itself. Knowing which oils to take is important.

Dr. Natasha says, “People with mental illness and learning disabilities need both the cod liver oil and the fish oils. Cod liver oil is mostly, largely for the immune function, the immune system. So in people whom the immune system is not working well, they are getting colds and flu and infections, I give them two teaspoons in the winter starting from September until about March, April. Then I say start sunbathing, reduce to one teaspoon. In the summer when you’re in the full sun bathing season, you can stop. Then, come winter, you start again, particularly for kids.” (Certified GAPS Practitioner Q & A, Weston A. Price Conference Minneapolis, Minnesota, 2017).

Sally Fallon, CEO of the Weston A. Price Foundation, says she had horrible night vision while driving and began to experience floaters in her eyes. Both had gotten progressively worse over the years. During this time, she had already been on a high quality cod liver oil. After switching to Fermented Cod Liver Oil, three teaspoons in the morning, three teaspoons in the evening, her eye floaters went away and her night vision improved to the point that neither was a noticeable issue. (Weston A. Price Chapter Leader lunch discussion, Montgomery, Alabama, 2016). Night vision and floaters in the eyes are both Vitamin A deficiencies.

For those on GAPS, only three flavors of Fermented Cod Liver Oil are GAPS approved: unflavored, mint and orange. The other flavors contain ingredients which upset the imbalanced stomach bacteria and yeasts in GAPSters. To carry Fermented Cod Liver Oil at a wholesale discount, the practitioner needs to have an office. Some practitioners do not recommend it because they can not access it at practitioner pricing, as they do not have an office, a factor which should not be used in determining which oil is needed.

Generic oils have undergone some clinical studies which give us further insight.

Nutrients says, “Since the 19th century, cod liver (CLO), for its source of vitamin D, has been used as one of the remedies to cure rickets. It has been the most commonly used supplement in the UK for decades.”

The Medscape Journal of Medicine says, “It turns out cod liver oil contains large amounts of vitamins A, D, and omega-3 fatty acids, and the health benefits may go beyond rheumatism and rickets. Vitamin A is essential for the immune system, bone growth, night vision, cellular growth, testicular and ovarian function. Pharmaceutical preparations are used to treat acne vulgaris and keratosis pilaris and to treat acute promyelocytic leukemia.”

Needling For Muscle and Bone Pain VS Acupuncture