Doctors Dietrich Klinghardt and Marco Ruggiero discovered a method of testing for Lyme that is proving to be more accurate than any other form of Lyme testing. The method, the Ruggiero-Klinghardt (RK) Protocol, uses a combination of electro-dominant screening consisting of Autonomic Response Testing (ART) with diagnostic ultrasonography and on application of therapeutic ultrasounds. The method came from findings with applied kinesiology, O-ring Testing and several other testing procedures. They found great success with ultrasound over different areas of the body, the brain, the thymus, the spleen, the vagus nerve and on the brain stem, followed by an extensive urine test. The ultrasound squeezes and relaxes the cells, which releases the microbes into the connective tissue. Some will stray into the blood and some will stray into the kidney and be excreted into the urine, which is the goal of the test.

Their findings were published in The American Journal of Immunology.

Dr. Dietrich Klinghardt is the Founder of the Klinghardt Academy, the American Academy of Neural Therapy, and is the Medical Director of the Institute of Neurobiology. He practices medicine as the lead clinician at the Sophia Health Institute, located in Woodinville, Washington. As the Founder and Chairman of the Institute for Neurobiology, with two locations, Germany and Switzerland, he provides biological interventions and Autonomic Response Testing assessment techniques.

Dr. Marco Ruggiero is a Molecular Biologist, a Diagnostic Radiology specialist and Inventor of the Immortalis Klotho Formula.

The doctors found when an ultrasound provoked Lyme bacteria into the urine, the urine test numbers were astounding. They found Lyme in many more people than other Lyme tests, to the point where anyone they suspected had Lyme, they found Lyme.

They were concerned their testing methods were wrong, over diagnosing the situation.

Further research showed Lyme was highly compartmentalized, meaning it sets up a living space in different areas of the body, much like sanctuaries. They found Lyme only lives in the blood with acute Lyme, where illness flares immediately followed the bite. They found the bacteria did not live in the blood in those with chronic Lyme Disease. In chronic Lyme they found it set up homes in a section of the brain, not the whole brain, or in the brain stem but no other connections, in one or two disks of the spine, but not others. They found it sets up homes and stays, like a sanctuary, not moving into the bloodstream. Past tests studies the bloodstream for Lyme, where it is not known to live in chronic situations.

It is common knowledge among practitioners who work in the field of Lyme that many people suffering from Lyme, do not have a diagnoses. This testing method can change all of that. The doctors found those who tested for Lyme didn’t just have borellia or babesia but has multiple infections, to the point where up to 95% of those who tested positive for borellia also had babesia. They found bartonella was more prevalent than others.

Testing showed Lyme or coinfections in all but less then 1% of suspected cases. They have found the prevalence of Lyme to be astounding. Every breast cancer patient they tested, showed Lyme. However not everyone with Lyme showed breast cancer. High blood pressure, high cholesterol and other disease ridden patients, including those with lymph node malfunction showed positive tests for Lyme. Dr. Klinghardt considers Lyme the Plague of our century.

A therapeutic standardized ultrasound (or like this one) can be used, testing takes less then 10 minutes. The first urine after the test can cost up to$500 but is often covered by insurance if tested at LabCorp. A Urine DNA test was used, performed by DNA Connexions. The Lyme panel tested for 4 different genes that are found in Borrelia burgdorferi and 8 common Lyme disease coinfectors including Babesia microti, Babesia divergens, Babesia duncani, Bartonella bacilliformis, Bartonella henselae, Bartonella quintanta, Borrelia miyamotoi, Borrelia recurrentis, Ehrlichia chaffensis and Anaplasma phagocytophilum. 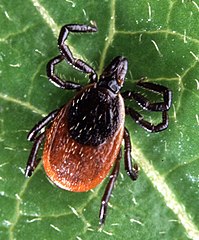 They also found the more toxicity was found in the person, the more glyphosate or heavy metals detected, the harder Lyme is to eradicate.

Interestingly enough, the spread of Lyme from sources other than ticks is remarkable. Fleas have been found to spread Lyme more readily than ticks, causing them to study house pets, specifically cats. They found over 90% of cats, including house cats, carried Lyme due to fleas. The concern being that fleas don’t just stay on the cat, they go to the carpet and humans, where they continue to feed, and transfer Lyme to people.

Dr. Klinghardt says, after following and studying Lyme patients for over four years, two-thirds of patients  who used antibiotics to eradicate Lyme, experienced lasting worsening of symptoms, only one-third showed improvement from antibiotic use. This is why many practitioners do not choose antibiotics every time Lyme is a possibility, but instead see better success with natural supports. If the bite is fresh and symptoms presented after the bite, Dr. Klinghardt says he chooses to use antibiotics to treat the Lyme, using the antibiotics for 3 to 6 six weeks after the bite. For chronic Lyme he does not see antibiotics helping the situation and instead uses other methods of support.

Interestingly enough he has found that liposomal herbs easily penetrate and eradicate biofilm and the infections they hold.

Hyaluronic acid is found to get the microbes out of the cell as it comes out to eat the hyaluronic acid. Then using herbs to flush out the microbes. Great assistance is seen by using the ionic foot bath to assist flushing the microbes from the kidneys while using cistus tea to flush them. Ultrasound and infrared, used over the area where the microbies are living, in sanctuary, was also also found to show great support.

How can you tell if your egg is healthy?