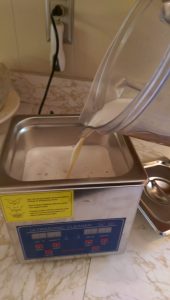 “Very, very high doses of vitamin C works as an antiviral, an antibiotic, an antihistamine, an antipyretic which means it lowers fever, and (is) an antitoxin. This is physiology, not philosophy,” says Andrew Saul, PhD in “That Vitamin Movie”.

“I had a bout of influenza not too long ago. This is what happens with almost anybody when they get run down, they don’t follow the rules and they eat too much pizza (emphasis his). I was taking 30,000 mg of vitamin C per dose. That’s six rounded teaspoons of ascorbic acid at one time and the symptoms were gone in less than two days,” Saul says. 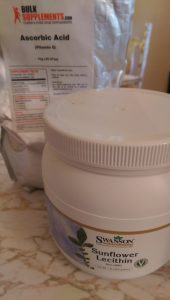 He goes on to say, “If I had one wish I would ask everybody to get four or five thousand milligrams of vitamin C a day. I think that would change the face of healthcare.” His reason for this is simple. “The body takes in about three dozen nutrients total but you’re made out of 40 trillion cells. There are thousands of chemical reactions in the body. Many of these reactions will only occur in the presence of a vitamin, co-enzymes.”

Coenzymes function together with your enzymes, working together as a team making a reaction. If the vitamin that works as the coenzyme to the enzyme is missing, it can not function properly. Many people who take high dose vitamin C, like liposomal C, feel phenomenal the following day. Some think it is due to proper ability of these cells to function since they are supported by the coenzyme.

Mega dose therapy is done through bringing your vitamin C levels up to bowel tolerance and holding that level until the issue or pain subsides.

Cancer treatments are seeing success with a hundred grams a day of vitamin C. Other issues like depression, fibromyalgia, chronic fatigue and even hypothyroidism are being approached today with mega 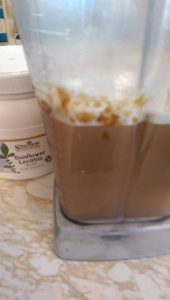 dosing of vitamin C, appropriate meal planning and natural remedies. Some, like Philip Day (health researcher, writer and speaker) have their closest family members take their age in grams of vitamin C daily.

Andrew Saul says there are no records of anyone dying from this sort of mega dosing.

“Sometimes we have a problem with physicians understanding how important vitamin C could be,” says Michael Gonzalez, D.Sc, PhD. “In terms of structure it’s similar to sugar. That’s one of the mechanisms that cancer cells use because cancer cells have more glucose inceptors. When you don’t have glucose there they think vitamin C is glucose so they bring them in. Then in the presence of oxygen you have two hydrogen, two oxygen and you produce hydrogen peroxide which kills cancer cells.”

Dr. Tracie O’Keefe, DCH, BHSc, ND says, our cells are lined with lipids. When you make liposomal vitamin C you’re wrapping the C with a lipid so that the lipid can pass through the cell wall and be absorbed into the lipid lining your cells. This creates greater absorption of the C. 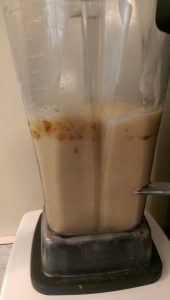 She says, “There are representatives for drug companies out there who are telling people making it this way won’t give you any liposomes all, it will give you is an emulsion. I have to go with results. Particularly with Natural Medicine we go by results.”

Dr. Thomas Levy, MD, JD, says all infections and toxins damage the body through oxidative stress. He says, “Vitamin C can prevent and reverse the oxidative damage while strongly stimulating the natural antimicrobial and antitoxic properties of the immune system.” (1:01).

Liposomal keeps in the refrigerator longer but is best made weekly to maintain optimal freshness.

To make liposomal vitamin C follow the pictures in this post which show pictorial instructions on the process.

There are many ways to make liposomal vitamin C. This is the one I use, with two options:

Option 1: Take 3 tablespoons of sunflower lecithin and put it in 1.5 cups of distilled water. Place this mixture in your Vitamix, blender or food processor on the lowest setting, or pulse it for 5 seconds then let this mixture sit for 20 minutes. If you don’t have a pulse setting blend at the lowest speed for half a minutes.

In another glass, like a mason jar, mix together 3 tablespoons of ascorbic acid with 1.5 cups of distilled water. This ascorbic acid is clean, this one is made from acerola cherries, as is this one. Any form of vitamin C can be used. Most folks do best with the whole form, which is sodium ascorbate, like this one. There are no studies showing which is better. Put the lid on the mason and shake this mixture until dissolved.

Add the two liquids together in the Vitamix and blend for 15 minutes. Be sure the temperature of the mixture does not exceed 85 degrees. If it goes over 95 degrees discard the mixture. If the mixture becomes too hot add an ice cube.

It is then added to the ultrasonic machine (described below).

Option 2: (This is the method I use) Put 3 cups of distilled or filtered water in the Vitamix, blender or food processor. Add 3 tablespoon sunflower lecithin and 3 tablespoons ascorbic acid. Mix on the lowest speed for roughly 20 minutes.

Pour the blended mixture into an ultrasonic cleaner (this is the one I use) and turn the machine on for 30 minutes. Again, add ice cubes if the mixture becomes too hot. I add 3 ice cubes at the 15 minute mark. This ultrasonic machine is a good choice, as is this one with a temperature control, and this one.

Stir the mixture occasionally with a stainless steel spoon. 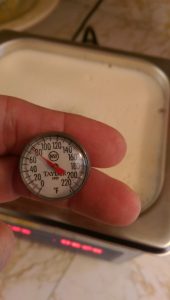 Do not put your finger into the mixture. The ultrasonic action can add an air bubble to the bloodstream, which is not healthful. Stirring with a spoon is recommended.

After 30 minutes pour your mixture into a mason jar and store it in the refrigerator.

Some people use soy lecithin which can be an endocrine disruptor. Sunflower lecithin is optimal but be sure to buy one without any fillers are added ingredients. This is the one I use.

For one story of the medicinal effect of liposomal vitamin C click here.

The Journal of Nutritional & Environmental Medicine says, “Liposomes are absorbed from the gut and into the liver, before being released into the bloodstream.”

A study using subjects taking oral liposomal C showed a difference with types of C ingested as well as diet. They reported, “Our observations suggest that poor oral absorption is related to carbohydrate intake. Glucose and other sugars compete with dehydroascorbate for absorption by GLUT transporters. The subjects in this study reported that they often consumed 10-grams or more of ascorbate in a single dose, without significant bowel effects, provided their carbohydrate intake was low.”

They further reported lymphoma cells responded with cell death, apoptosis, at a rate of 30% necrosis using ascorbate at 300 mML 21. When intake was increased to 400 mML 21 cell death also increased to 50%.

Liposomal dosing should be done apart from food so there is no competition for absorption.

Purchasing liposomal vitamin C is not an easy task as many manufacturers add fillers and ingredients, like natural flavors and potassium sorbate, which are not beneficial to a damaged micrombiome rebuilding on GAPS.

Liposomal vitamin C contains phosphatidylcholine which is a key player in repairing a leaky gut. To read more click here.

The Reason Yolks Are Such A Big Part Of Gut Healing

Can Probiotics Create Ethanol In Your Body?