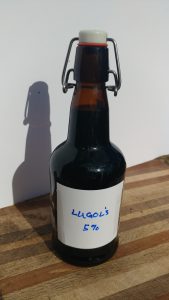 Lugol’s iodine is discussed thoroughly by many Medical Doctors such as Dr. David Brownstein, Dr. Guy Abraham, Dr. Jorge Flechas and others such as Lynn Farrow. In 1833 it was discussed and used extensively, as explained in the book United States Dispensatory, where they say, “Iodine was first employed as a medicine in 1819, by Coindet, of Geneva. Iodine whether taken into the stomach in the form of the element or as one of the salts, is absorbed readily and circulates in the blood. The possibility of the absorption of iodine through the skin has been a subject of some difference of opinion.”

In 1932 Nyiri and Jannetti (J.P. Ex. T., 1932, xlv, 85) found, “From experiments upon rabbits with the tincture of iodine concluded that about 88 per cent. of the iodine evaporates from the surface in the course of a few days but that the remainder, which combines with the skin is gradually absorbed and appears later in the urine.” (p 568).

The United States Dispensatory says iodine is a powerful stimulant to heart and blood vessels, influences metabolism, increases the breakdown and elimination of uric acid absorbs fibroid tissues, breaks down syphilis and tuberculosis lesions. They specifically say, “In the early stages iodine is useful because it forms a freely soluble compound with the mercury and thereby tends to prevent the deposit of the metal in  internal organs.” (p569)

They go on to say, “In leprosy it apparently has a somewhat similar type of action, although less marked. It has also a potent effect in actinomycosis and even appears to have a direct curative effect.” Actinomycosis is a rare infectious bacterial disease.

They used and reported great success with pleurisy, pericarditis, bronchitis, rheumatism, goiter and heavy metal contamination. They say, “Potassium iodide forms in the body a freely soluble compound with either mercury or lead, and is therefore frequently used in the treatment of lead poisoning or in mercurial cachexia, to hasten the elimination of the metal.”

It was further praised as the most powerful germicide available, “One part in 28,000 killed both B. coli and Staph. aureus in thirty minutes. Simons founds that to kill anthrax spores much stronger solutions were needed, the U.S. P. tincture (7 per cent.) requiring two hours.” They continued using it as a surgical disinfectant with studies that found, “Iodine was the only one of the germicides tested that would kill bacteria in strengths that were not injurious to the tissue cells.” (p 570)

In addition to use as a surgical disinfectant, they used it for fungus infections of the skin like ringworm.

Iodine gained popular notoriety in 1812 by Courtois, a soda manufacturer of Paris.

The Dispensatory says, “It exists in certain marine algae, particularly the kelps and rockweeds, which have long been its most abundant natural source. In different countries sea weeds are burned for the sake of their ashes, the product being a dark-colored fused mass called kelp, varec or barilla, according to the locality where it is produced.” (p 567)

They go on to say, “All sea weeds do not contain enough iodine to make the industry profitable. Van Itallie has shown that Zoster marina only contains 0.0019 per cent of total iodine.” (p 567). 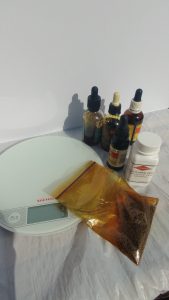 Protect your counter top by covering it with a large trash bag. Only use wood or glass jar and utensils.

Put 67.5 grams potassium iodide into a quart mason jar filled with 16 ounces of distilled water. (This bottle is 100 grams, we use this scale to measure it.) 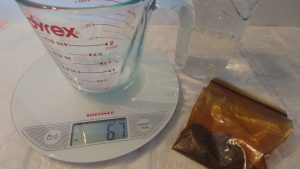 Add 34 grams of iodized crystals and stir until dissolved. (This bottle contains 50 grams which we measure on the same scale. This one is 100 grams if you’re making a double batch.) These crystals are purchased from Chili or China and can also be called Iodine Prilled or Iodine Balls. If you do not live in Chile or China when placing your order, expect the full 6 weeks for them to arrive. 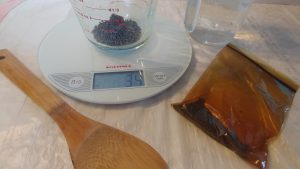 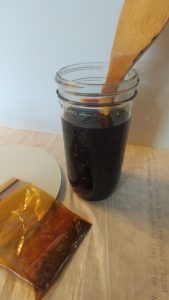 Let the mixture stand overnight and it’s ready to use the next day.

************* Jim Chapin,  The Xterminator and owner of a natural pest control company XthatBug.com in Chattanooga, Tennessee, did some more advanced math for us and found that if  you use the two products listed above (this one and this one), they can both just be added to 23.7 ounces of distilled water.

Making your own Lugol’s 5% costs the same for 16 ounces as is does to buy half of a one ounce bottle of Lugol’s from commercial sources. A 16-ounce bottle of 2% is commercially about $90.00. It would take 2.5 bottles of this commercial bottle to equal the recipe above, costing you $225. Yet you can make it yourself for $27.00.