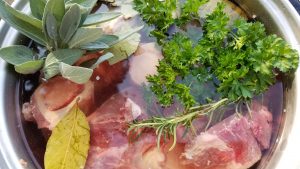 Herbs and spices are wonderful for adding flavor to cooking, but their medicinal values are phenomenal. Bay leaves show incredible support to a healthy diet and should be used to both make food taste better, but primarily to support the body.

They reported the study on bay leaves which found, “This study demonstrates that consumption of bay leaves, 1 to 3 g/d for 30 days, decreases risk factors for diabetes and cardiovascular diseases and suggests that bay leaves may be beneficial for people with type 2 diabetes.”

The Pakistan Journal of Pharmaceutical Sciences reported a study of bay leaves and bacteria. Bacteria was removed from the oral cavities of 200 people, isolating 176 bacterial isolates. They found an aqueous decoction of bay leaves exhibited 53.4% antibacterial activity.

The College of Pharmacy, Seoul National University in Seoul, Korea performed a study on bay leaves which was reported in the Archives of Pharmacal Research. They found bay leaves caused neuroprotective effects. They classified it as a reactive oxygen species (ROS) which is, “Important mediator in many neurodegenerative diseases including Alzheimer’s disease and Parkinson’s disease.”

The Journal of Animal Physiology and Animal Nutrition reported a study which looked at, “Plasma oxidative status in growing rabbits, fed with and without enriched-fat diet, integrated with and without dried bay leaves meal.” They found, “The dietary treatment with bay leaves meal, in the extend of 1 g/kg feed, confirms the lowering cholesterol activity and controlling the oxidative status.”

Most people used spices which are dried, and only have access to fresh herbs and spices during the short summer growing season. This brings up the question of health benefits in fresh plants as compared to dried.

The Journal of Agricultural and Food Chemistry studied fresh bay leaves and compared it to oven drying, air dried, freeze dried and frozen bay leaves. They found, “Oven drying at 45 degrees C and air-drying at ambient temperature produced quite similar results and caused hardly any loss in volatiles as compared to the fresh herb, whereas freezing and freeze-drying brought about substantial losses in bay leaf aroma and led to increases in the concentration levels of certain components, e.g., eugenol, elemicin, spathulenol, and beta-eudesmol.”

Bay leaves come from the Bay Laurel tree, which can be grown in most climates. It can be trimmed and formed into any shape, even used as a topiary.

{Affiliate links pay for this site}.