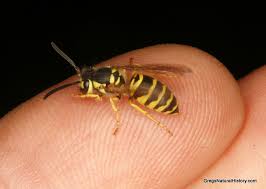 Stories of yellow jackets are becoming more and more plentiful this time of year. The recent discovery of this Natural Yellow Jacket Killer came about like a lot of great inventions, it was an accident.

I fed the chickens some leftover bone broth. They ate the broth for a few minutes but then moved along to other delicacies in the yard.

The broth pot remained in the yard hoping the chickens would come back to fill their tummies but what happened was something very unexpected. Each time I checked the pot was more and more loaded

with yellow jackets! They landed in the broth and drank, filled their tummies, swam in circles like they were stuck and sank.

It’s my understanding that every bug and insect has it’s position so I removed the pot. When we dumped the pot there were over 60 dead yellow jackets in just 24 hours time.