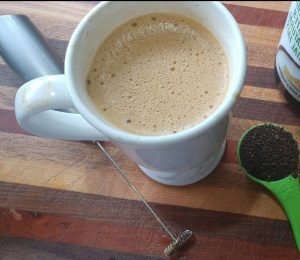 For those who suffer from Adrenal Fatigue, coffee is not optional, it’s an emphatic no. Coffee has a distinct flavor and for many, creates a morning quiet time that is incomparable. There are few things more pleasurable than sitting in a quiet house in the early hours of the morning, drinking a hot cup of coffee, listening to the birds singing as the sun rises while reading the Bible or your favorite book. When you have Adrenal Fatigue, this moment is not optional.

A substitute is necessary.

On Full GAPS, weak coffee is GAPS compliant. Weak coffee is classified as coffee you can read the paper through. Dr. Natasha herself enjoys coffee every morning. She says, “I love coffee! I drink one cup of coffee a day, with cheese and honey and raw cream.” (Certified GAPS Practitioner Q & A, Weston A. Price Conference Minneapolis, Minnesota, 2017).

When asked if she puts the cream in her coffee, she says, “No, if you put raw cream in your hot coffee, you’re pasteurizing the cream. What’s the point? If you put honey in the hot coffee, you’re damaging the honey. I have cream in one pot, coffee in another, honey in another. We always have cheeses on the table, French, Italian cheeses and honey. We just eat cheese with honey. I like my coffee black, with nothing mixed in it. But people mix it. They take it mixed.”

For someone with Adrenal Fatigue, drinking coffee can cause negative effects as it strips the adrenals further. Click here to read more about Adrenal Fatigue. For folks who have suffered from Stage Four Adrenal Fatigue, one cup of coffee in the morning can cause dry heaves with easy physical exertion in the afternoon. When you love coffee and that quiet moment in the morning, there is another option – Nourishing Plot Coffee or the GAPS Bulletproof Coffee, a take off from Bulletproof Coffee, in a liver supporting manner.

When used with an intermittent fasting regimen, only eating in a six hour window such as from noon to six, we see loads of parasites, yeast, biofilm and gallstones flushing.

Pour the dandelion root granule tea into the cup so that is half full.

Dr. Natasha says liquid stevia, like this, is, “OK when diarrhea and other serious digestive problems are gone.”

The truth is, dandelion root granule tea is a powerhouse of support for the liver and the body. 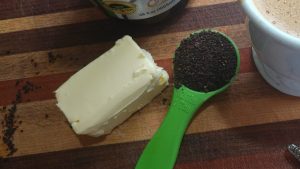 Dandelion root granules are highly supportive to the liver. The Review of Diabetic Studies says, “Dandelion has been considered a key anti-diabetic plant because of its anti-hyperglycemic, anti-oxidative, and anti-inflammatory properties. This is due to the various bioactive components present in dandelion, including polyphenolics, sesquiterpenes, triterpenes, and phytosterols. ”

BioMed Central performed a test using dandelion root granules with HIV patients and found, “The dandelion extract showed strong activity against HIV-1 RT and inhibited both the HIV-1 vector and the hybrid retrovirus replication. These findings provide additional pharmacological information on the potential therapeutic efficacy of Taraxacum officinale. This could represent another starting point for the development of an anti-retroviral therapy with fewer side effects.”

Advances in Hematology did a study with dandelion root granule on liver function and found, “Experimental study of hemoglobin in the control groups with experimental groups showed significant increases in mean hemoglobin in group 1.”

They go on to say, “This could be due to the positive effect of dandelion on the liver [6] and increased secretion of erythropoietin (a substance that regulates the amount of red blood cell) per. As research, phenolic compounds in dandelion such as: chicoric acidact as an antioxidant by preventing the oxidation of collagen and cells and inhibits the penetration of viruses in cells, and chlorogenic acid is cholagogue: its regular ingestion helps the flow of bile and thus reduces the adverse effects of bile stagnation.”

A Call To Action on Genetically Modified Food Labeling