Fluoride poisoning from tap water, tablets and dental uses is horrifically damaging to our health and has even lead to death.

The pineal gland controlls our sleep/wake patterns by controlling our natural melatonin levels. It is known as our “third eye” in the medical community.

Weakening of the bones, or skeletal fluorosis, is a sign of severe fluoride poisoning.

In more advanced cases the teeth turn tan or brown.

Fluoride pills were commonly given to children in the 1970s “for their health” but were later discovered as poison. Generally these pills were 2 mg and parents were told they were only dangerous after ingestion of 200-500 pills. Jason Burton, a 2-year-old from Queensland, Australia, was administered half a pill daily then accidentally ingested 4 pills and died. Read more about the tragic unnecessary death here.

Fluoride poisoning comes from many different sources, all of which can be avoided.

Not all states treat their water equally. 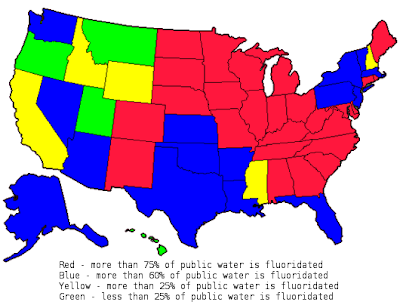 The debate on where the poisoning is coming from is still under harsh scrutiny. Water treatment containing fluoride began in the 1940s but white teeth staining from fluoride poisoning was documented as problematic in the 1990s. Fluoride tablets were readily given to children in the 1970s.

As consumers we are in control of what we ingest and need to be our own detectives.

For one of the most effective water treatment systems noted for removing fluoride click here. With these tools you can be in control of your own fluoride poisoning.

Foods Not Worth Buying Organic