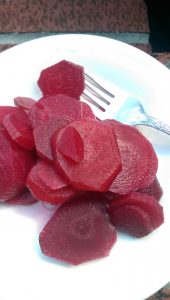 Pickled beets are a different dish than probiotic fermented beets, such as kvass. 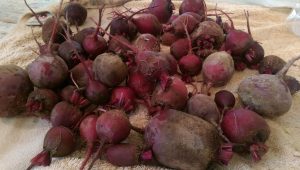 This picture count, minus 4 of the big beets (because Mama wanted some french fried!), were used in this recipe. It’s difficult to give an exact ratio of beets as we just use what is harvested and adjust the apple cider vinegar and honey to taste. We generally fill a 3-quart saucepan three quarters of the way full.

Toss cut up beets into the 3-quart saucepan and cover with filtered water. Bring to a boil and cook until soft. This process only takes a few minutes.

Drain the pot until there’s roughly a half cup of water remaining. This will be less than it looks. Add a half cup of local honey and one cup apple cider vinegar. Stir until combined. 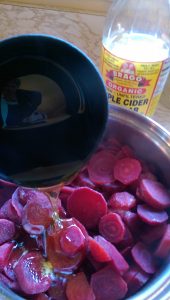 [yumprint-recipe id=’37’]*Nourishing Plot is written by Becky Plotner, ND, traditional naturopath, CGP, D.PSc. who sees clients in Rossville, Georgia. She works as a Certified GAPS Practitioner who sees clients in her office, Skype and phone. She has been published in Wise Traditions, spoken at two Weston A. Price Conferences, Certified GAPS Practitioner Trainings, has been on many radio shows, television shows and writes for Nourishing Plot. Since her son was delivered from the effects of autism (Asperger’s syndrome), ADHD, bipolar disorder/manic depression, hypoglycemia and dyslexia, through food, she continued her education specializing in Leaky Gut and parasitology through Duke University, finishing with distinction. She is a Chapter Leader for The Weston A. Price Foundation. becky.nourishingplot@hotmail.com

Sand In Your Supplements- You May Be Paying to Damage Yourself

Magnesium Stearate, What It Really Does To Your Body