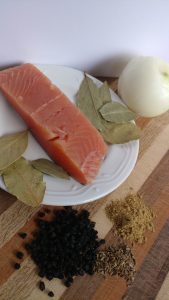 “Over 90%  of the things we consume come from foreign countries due to man’s insatiable appetite for more,” says the documentary Where It Comes from, Salmon, The Sushi Phenomenon. They explain the production process of farmed raised salmon thoroughly. Knowing facts can help us navigate the waters ourselves, giving us the knowledge to make the most beneficial food choices.

Farm raised salmon is referred to as High Tech Salmon.

One of the largest producers of farmed salmon, is Norway. They export around 100 tons of farmed salmon every day. The salmon is shipped to over 70 countries. “The invention of sea cargo containers in the 1950s brought about a revolution in the world market,” they say.

Farm raised salmon swim in floating enclosures, along the ocean’s coast, where they grow to full size. The floating enclosures have nets which extend down to the ocean floor. “The feces from the fish will go out through the nets,” says Hildebjorg Asvang, Production Manager for Aquaculture.

“The salmon feed is pumped into the cages daily. The feed for the salmon consists of 25 percent fish remains and fish oil. The remaining 75 percent is made up of plant materials. The ratio of fish to plant matter has been drastically reduced over the years. In 1998, 75 percent was made up of fish matter,” they say.

Farm raised salmon meat is grey in color, so dyes are added to the food. “In marketing farmed salmon it has been found that it is necessary for salmon to have a red color that fits the consumer’s image of salmon flesh. To achieve this, carotenoids are added to fish feed, so that farmed salmon ingest it in the same way as wild salmon. In Norway, astaxanthin, the most common carotenoid in the wild salmon’s diet, is mainly used. In other countries, such as Scotland, Ireland, Chile and Canada, both astaxanthin and canthaxanthin are used,” Bellona says.

It takes 2.5 years for the salmon to go from egg to processing size. Asvang says, “In water, and in air, there is bacteria and virus. Maybe more in water than in air.”

Every fish is given vaccines to prevent disease. Where It Comes From, Salmon says, “This is meant to prevent the need for antibiotics in the open ocean.”

Asvang says, “When the fish are 50 grams, they do the vaccinations.” At this size, they are not even as big as a hot dog. At 100 grams they are moved to the holding tanks in the ocean.

Double netting is used to ensure the farmed salmon do not escape into the deep. Should that happen, the operators would face high fines, which prevent wild salmon from mixing with farmed varieties.

Asvang says, “It looks, pretty much, like a wild salmon.”

Salmon lice is a concern on fish farms. Some fish farms put about 10,000 farm raised lung fish into each fish farm enclosure to eat salmon lice. Other fish farms use chemicals to control salmon lice. In farms where lung fish are used to eat sea lice, the fish enclosure nets are cleaned every 10 days so that the lung fish do not spend their time cleaning the nets, but instead eat the salmon lice. To clean the nets, they use a large machine, similar to a vacuum cleaner.

The salmon raised on farms are channeled to holding nets and spend 24 hours waiting in netted pools in front of the fish factory and pumped in for processing through tubes. Asvang says, “The fish experience no stress whatsoever throughout the course of their lives while out in their ocean enclosures. Once they arrive, they receive 24 hours of rest before moving down to the slaughterhouse. Otherwise, the quality of the fish would suffer.”

While held in these nets, and the nets are pulled in to funnel the fish into the tubes which lead to the processor, some fish start to float belly up. They say, “The salmon that are about to die, are caught (with a net on a long pole) and immediately sent up the pipe.” Meaning, dying fish are put closer to the intake tube so they can get processed quicker.

Salmon are currently classified as pets due to a new 2012 law. This means a death as pain free as possible is recommended. Farmed salmon are killed with an electrical shock. Prior to this law, farm raised salmon was anesthetized to death.

Asvang says, “Every fish that does not meet the standards for sale is sent for further processing. It is either ground into fish food (or) Omega 3 capsule.”

Henning Beltestad, CEO, Seafood Company says, “Standards are more individual from company to company. It’s very different from what it was 30 years ago. This is technology based farming. Today, in Norway, we produce about 1.3 billion tons of salmon. Ten years ago, maybe half of it. Thirty years ago only close to 100,000 tons, maybe.”

The biggest rise in farm raised salmon comes from sushi consumption. “More and more of the volume is going into sushi,” Beltestad says. “Smoked are the best seller all over the world but we see the development of prepackaged products are more on demand.” All salmon used for sushi is shipped in special containers, on container ships, which are held at -62 degrees Celsius (-76 F). It is then put on ice and shipped via trucks to processing plants where the salmon is processed by sushi masters who remove the scales and bones. Fish pieces and rice are shipped to stores where sushi is assembled.

In comparison, wild caught salmon are simply naturally raised and caught by fishermen.

Environmental Health Perspectives says, “Several organic contaminants occurred at elevated concentrations in farmed Atlantic salmon compared with concentrations of the same contaminants in wild Pacific salmon. We also found that polychlorinated biphenyls (PCBs), toxaphene, dieldrin, dioxins, and polybrominated diphenyl ethers occurred at higher concentrations in European farm-raised salmon than in farmed salmon from North and South America. Health risks (based on a quantitative cancer risk assessment) associated with consumption of farmed salmon contaminated with PCBs, toxaphene, and dieldrin were higher than risks associated with exposure to the same contaminants in wild salmon.”

They found, “Consumption of farmed salmon at relatively low frequencies results in elevated exposure to dioxins and dioxin-like compounds with commensurate elevation in estimates of health risk.”

They concluded, “Health risks of cancer and a variety of noncancer health effects resulting from consumption of dioxin-like compounds and other contaminants may outweigh the benefits of consumption of certain types of seafood. This is particularly true in girls and young women who are exceptionally vulnerable to DLC-associated adverse effects because of their long half-life in the human body and because these compounds have serious adverse effects on the developing fetus.”

Food Agents inspect fish coming into fish markets, most of which are farm raised. Food Agent, Heribert Bachmann, as he was inspecting a turbot fish said, “We always look at the gills, wonderfully red, no problem. You need to be careful with turbot. There are no stones, which sometimes form on the back, which is a sign it was caught in the wild, not on a farm. The farm fish are somewhat darker and they become black when you touch them.”