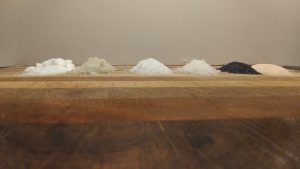 “The basic reason we need sodium is osmotic pressure, a pressure on the inside and outside of the cell. Our bodies are supposed to be salty. We absolutely need a teaspoon and a half of salt a day to give us that osmotic pressure,” says Sally Fallon, President of the Weston A. Price Foundation. “Salt reduction will help about 10% of people with high blood pressure. Another 10% their blood pressure goes up when they reduce salt. About 80% of the population, it doesn’t have any effect on blood pressure.”

Traditional diets consumed much more salt than we do today, primarily due to the fact that salt was used to preserve meats. In the past they consumed, on average, about three teaspoons of salt a day.

The truth is, we are salty people. When we sweat, salt is excreted through our pores. When we cry, we cry salty tears. Sodium is an important mineral in the body, in fact it’s often classified as one of the three pillars of the body: sodium, potassium and calcium. Without sodium, many biological functions can’t happen.

In his book The Salt Fix, Dr. James DiNicolantonio says, “The stringent low-salt guidelines were based on a guess: we essentially gambled that the small benefits to blood pressure that we see in some patients would extend to large benefits for the whole population. We glossed over why salt may increase blood pressure in some people but not in others. Correlation does not equal causation.”

He goes on to say there are health risks to, “Low salt intake – including several side effects that actually magnify our risk of heart disease – such as increased heart rate; compromised kidney function and adrenal insufficiency; hypothyroidism; higher triglyceride, cholesterol and insulin levels; and, ultimately, insulin resistance, obesity and type 2 diabetes.”

Fallon says, “Salt is important for neurological development. We have two types of cells in our brains, the white cells and the grey cells. They help us do our thinking, make connections, put two and two together. You need salt to develop (these) glial cells in your brain. Salt is sodium chloride. The body uses chloride to make hydrochloric acid, that’s what we need for digesting meat. A lot of people say, oh I can’t digest meat, it’s probably because they’re on low salt diets.”

She goes on to say, “Doctors tell me people who go on low salt diets are much more prone to getting parasites because they don’t have the hydrochloric acid in their stomach, which is a very strong acid, a pH of about 2. That’s your first defense against parasites. Salt is very important.”

Proper salt is mineral salt, which is salt harvested from the sea or mined from salt mines. It is unrefined and is loaded with minerals, hence giving it the label mineral salt. Searching your grocery store or internet for “mineral salt” will result in aggravation because each mineral salt goes by its own name. Mineral salt is any salt with a color to it, usually grey, pink or beige, where each particle is slightly different in color from the others. It is unprocessed, unrefined. Ocean water is washed up into salt beds where the water evaporates and leaves behind mineral salt or mines where former ocean water was housed and drained contained salt. All salt comes from the sea in one way or another. The term “Sea Salt” is a marketing term and does not necessarily mean it is healthy. What we are looking for is a salt that is unrefined, variable in color from one grain to the next, and doesn’t have any free flowing agents, which are generally aluminum based.

Blood pressure numbers have changed over the recent 25 years, interestingly enough, coinciding with the introduction of blood pressure lowering medications. Tom Cowen, MD, says, “In medical school we learned that the top or systolic number was normal if it was less than 100 plus the age of the patient. Thus 170 would be normal for a 70-year-old man. The bottom or diastolic number was considered normal if it was under 90.”

There are many studies on the NIH that show salt is bad for you health, however, the type of salt tested is not disclosed in the findings and is assumed to be processed salt.

In his book Salt You Way To Health, Dr. David Brownstein found mineral salt to be incredibly nourishing and important to cellular function.

The facts are firm, mineral salt is healthful and necessary to bodily function. It extracts more nutrition from food and makes it more palatable.

The Korean Journal for Food Science of Animal Resources reported salt used in marinades was tenderizing to the meat.

The Journal of General Physiology reported a study on salt used on the muscle tissues of frogs and found it broke up the muscle fibers.

National Academies Press reports, “Excess salt is not stored in the body; therefore salt balance under most normal conditions is reflected by equal input and output.”

The Journal of Clinical Investigation has found, “Salt restriction blunts the vascular response and potentiates the adrenal’s, a physiologically important influence in view of aldosterone’s role in sodium conservation.” Which means salt intake assists in inflammation reduction (vascular response) and adrenal support.

Protecting Yourself From WiFi with a Faraday Cage for Sleeping