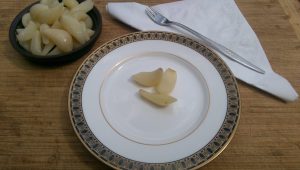 Garlic is well known as a natural antibiotic, shows antifungal properties and is well as a natural testosterone boosting food.

Fermenting garlic can be done with the skins on or with the cloves peeled. Cloves can change color during fermentation representing a few potential factors.

Epicurious says, “‘We don’t know a lot about this,’ says Dr. Luke LaBorde of Penn State University’s Department of Food Science. ‘It’s definitely enzymatic and nonenzymatic reactions occurring in the garlic, but we really don’t know entirely why’.” Some say this is connected to variations of different nutrients.

Plant Foods For Human Nutrition, a publication of the Netherlands, reported a study on fermented garlic which showed, “Superoxide dismutase (SOD)-like activity, scavenging activity against hydrogen peroxide and the polyphenol content of the garlic extract were increased 13-folds, more than 10-folds, and 7-folds, respectively, as compared with those of the control garlic extract.”

They go on to say, “The fermented- garlic is suggested to possess desirable anti-oxidative properties.”

What’s specifically interesting is, as they say, “Hydrogen peroxide is generated from the scavenging reaction by SOD.” 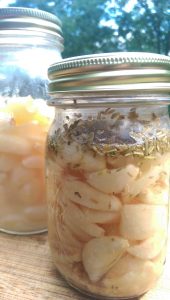 Epicurious says, “As far as they can tell, garlic enzymes—which give it that distinct flavor—break down over time. Naturally occurring sulfur in the garlic interacts with those enzymes, occasionally turning it slightly green or blue. Sometimes the color change happens, sometimes it doesn’t. Shifts in temperature, pH, and the age of the garlic can also come into play.” Older garlic turns blue or green more frequently than fresh garlic.

The Journal of Food Science reported a study where they tested all 22 amino acids with garlic fermentation. They said, “Blue–green pigments are easily generated by mixing juice from heated white onions, a good source of 1-PeCSO (1-propenyl-L-cysteine sulfoxide) (which causes the) formation of thiosulfinates, ‘color developers’.”

They further concluded, “Green discoloration” in crushed garlic represents a mixture of yellow and blue pigments, and the blue color results from at least 8 pigments, depending on amino acid composition, rather than a single blue pigment. Results indicated that amino acids other than glycine have the potential to form blue pigments.”

The Journal of Agriculture and Food Industry posted another study testing the pigmented fermented garlic saying, ” Alliinase and acetic acid were required for the color formation. UV-vis spectral measurements and pH results suggest that the color formation occurs by two kinds of processes: one enzymatic and the other nonenzymatic.”

Some traditional cultures make Black Garlic, a totally different product than fermented garlic. Black Garlic is made by putting dried unpeeled garlic in the slow cooker on the warm setting for 12-20 days without opening the lid. This is not a probiotic food, it’s still good for you, just not a probiotic.

Probably the most telling aspect of fermented garlic is its incredible against Staph and the bacteria MRSA (Methicillin-resistant Staphylococcus aureus). MRSA that is specifically resistant to antibiotic use consistently shows no match for fermented garlic. 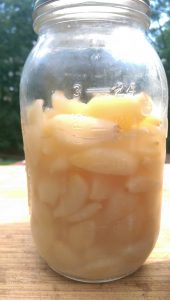 Microbiologist and Pharmaceutical Scientist Michelle Moore says, “Unlike antibiotic drugs, garlic is very complex, containing 27 known active ingredients and dozens more that work in unknown ways. Many of these ingredients can work together synergistically inside the body in intricate ways to fight infections. The herb is highly effective against resistant MRSA bacteria because it is too complex chemically for the bacteria to become resistant to. In contrast, the antibiotic drug Zyvox, which is prescribed for many MRSA cases, has only one active ingredient: Linzolid.”

The British Journal of Biomedical Science says, “Resistance to mupirocin in MRSAs is increasing. Allicin is the main antibacterial agent isolated from garlic.” The tested garlic isolates and found, “88% of clinical isolates had MBCs of 128 microg/mL, and all were killed at 256 microg/mL. Of these strains, 82% showed intermediate or full resistance to mupirocin; however, this study showed that a concentration of 500 microg/mL in an aqueous cream base was required to produce an activity equivalent to 256 microg/mL allicin liquid.”

Fermenting garlic is one of the easiest and most potent things a person can do for their health.

Fill a quart mason jar full of garlic cloves (peeled or unpeeled, your choice), add a tablespoon of mineral salt. Fill the jar with filtered water leaving an inch of headroom. Let the jar sit for a few weeks or longer.