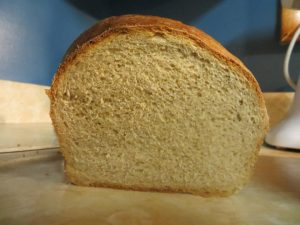 As people phase off GAPS one of the first foods desired is bread. The phasing off GAPS protocol has an order for a reason. Much like rebuilding on GAPS, coming off GAPS is a building protocol.

“The beauty of sourdough fermentation is lactobacillus does such a wonderful thing in bread. It cuts apart those bonds they get difficult to digest, the bacteria digest the sugar, and deactivates the phytic acid,” said Min Kim who phased her family off GAPS and spoke about her knowledge in her talk Redeeming Bread, How to Make Einkhorn Sourdough at the Weston A. Price Annual Conference in 2015.

Kim says each sourdough bread is specific to each household in which it was made as the starter captures yeast from the air in your own environment.

“There is more than one way to make bread,” she says.

Einkhorn is an unhybridized grain meaning it hasn’t been altered in any way. This is considered an Ancient Grain or Biblical wheat.

Einkhorn literally means one seed, Kim says. It grew in modern day Iraq and Sieria, in the Fertile Crescent. It contains a strong root system which enables it to uptake more nutrition from the soil 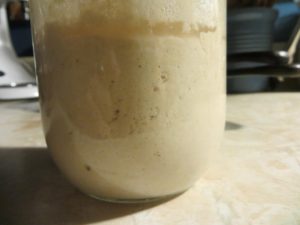 Each grain has a protective husk which adds another step in processing. This husk protects the wheat berries from collecting mold.

Einkhorn is low in glutanins and has different gliadins she says. Einkhorn has a favorable ratio of gliadins making it easier to digest even to those with non-symptomatic celiacs and others with sensitive digestive systems.

“Phytic acid is found in the bran and interfered with the body’s ability to absorb calcium, iron, zinc, magnesium and copper,” she says. Wheat bran has 4,873 mg per 100 grams. Sourdough whole wheat bread has 79 mg per 100 grams of weight.

Kim adds ground Einkhorn should be stored in the refrigerator since the germ, once ground, becomes rancid. This is true for germ in general no matter what grain is used.

A sourdough starter can be built by mixing equal parts flour and water morning and evening, daily. This is considered the Levain Build (pronounced la vain), the pre-ferment. Levain is French for leaven which is synonymous for sourdough. Organic rye flour works best and needs to be fed less often. After seven days of feeding your starter you will have active bubbles giving you a quality bread. After two to three weeks the bacteria present have more ascetic flavors and lactobacillus flavors giving your bread a higher quality of flavor. 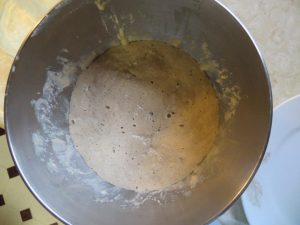 Sourdough starters prefer 73-74 degrees and should be stored and mixed in either stainless steel or glass bowls. Many people just store their starter next to their oven or use warm water to mix the starter.

Min uses a recipe calling for: 900 grams whole grain Einkhorn flour, 810 grams filtered water, 135 grams of levain and 18 grams of celtic salt. She mixes by hand and then covers it for and hour to rest. After resting check and recheck every 30 minutes for strength. Fold the dough with a scraper and refrigerate overnight for 15-20 hours. This is because Einkhorn soaks up water slowly. The next morning take out the dough and shape it with water after dividing in two equal parts. Shape the dough into a round. Let the round rest for three hours covered with a damp dish towel. This round can be worked for 10 minutes max then cooked in this shape or cooked in a buttered loaf pan. Let it rest for 3 more hours. Place loaf in a 500 degree oven. Reduce the heat to 450 and back for 25 minutes. Min recommends removing the loaf from the pan immediately so it does not get soggy.

This recipe overwhelms me. This is the recipe I use. 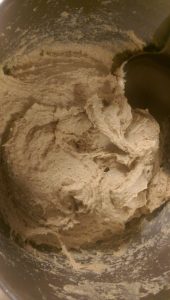 If you have a RO system it’s not ideal for making sourdough bread. Spring or filtered water that’s been mineralized works best, Min says.

“Sourdough improves with age,” she says.

Laura Snell, a real foodie from Chattanooga who runs The Main Street Farmer’s Market, uses 2 ounces of starter, 10.5 ounces of water (which varies depending on the humidity), one pound of flour and 1.5 teaspoons of salt. She mixes it together being careful to not over kneed. She generally does a 30 second stir. She then puts the mixture on the counter-top and leaves it overnight then kneads it into a ball. She puts it in a dutch oven with an airtight lid on 500 degree then reduces it to 450 degrees and cooks for half an hour with the lid on then another ten minutes with the lid off at 435 degrees.

Einkhorn wheat can be sourced at:

Min Kim can be reached on Instagram at @minskitchen.

Another ancient grain that can be used is Emmer wheat but some say Emmer is best used for cakes and pastries where Einkhorn is better for bread.

*Nourishing Plot is written by Becky Plotner, ND, traditional naturopath, GAPS who sees clients in Rossville, Georgia. Since her son was delivered from the effects of autism (Asperger’s syndrome), ADHD, bipolar disorder/manic depression, hypoglycemia and dyslexia through food she continued her education specializing in Leaky Gut and parasitology through Duke University, finishing with distinction. This is not a news article published by a paper trying to make money. This blog is put out by a mom who sees first hand the effects of nourishing food vs food-ish items. No company pays her for writing these blogs, she considers this a form of missionary work. It is her desire to scream it from the rooftops so that others don’t suffer from the damaging effect of today’s “food”.

Hidden Soy In Hamburger Could Be Making You Sick