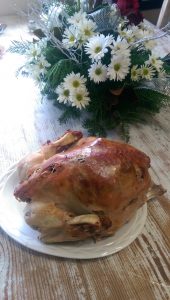 The Thanksgiving turkey isn’t just the centerpiece of the table, it’s a nourishing dish that can satisfy and satiate. The meal can be made stage 2 on the GAPS Protocol, made just as the Italian Casserole described on advanced stage 2 in the GAPS book. 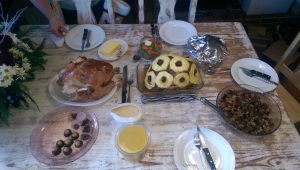 First, choose an organic bird, optimally a pastured turkey, so that glyphosate isn’t involved in your nourishing meal. Click here to read why an organic bird is necessary. Brining the turkey adds flavor but also breaks up the muscle tissues making the meat easier to digest. Brining the turkey can be done in a large stainless steel pot, some even use a food grade five gallon bucket.

The brine base is one cup mineral salt, one cup local honey or 1/4 cup green stevia. From there any flavor group can be used. This selection is favored along with the salt and sweetener: 4 oranges, 4 lemons, 3 onions, 6 garlic cloves, 4 cinnamon sticks and water to cover the bird. If the turkey is too big to be fully submerged in the pot, half can be submerged one day then flipped and other half marinaded the next day. The pot with the brining turkey should be kept in the refrigerator. 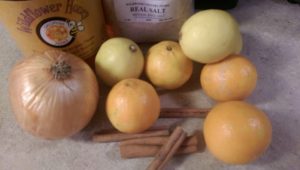 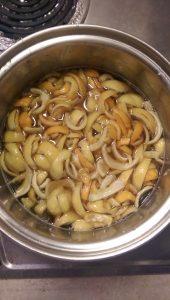 When it comes time to cook the turkey, remove the bird from the brine and drain the liquid trapped in the turkey’s internal cavity. Place the turkey in a roaster on the support rack to keep the bird lifted out of the drippings as it cooks giving you crispier skin. Using a roaster instead of an oven allows the drippings and steam to keep the turkey moist without having to baste the turkey every fifteen minutes prolonging the cooking time. Cooking the bird in the roaster is similar to cooking it in a turkey bag without the toxicity from plastics. Add gravy making vegetables to the bottom of the roaster including two to three onions, four garlic cloves, one  sliced rutabaga, one to two carrots (the more carrots used the more orange the gravy) and two to three stalks of celery. 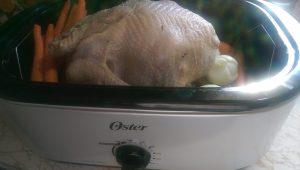 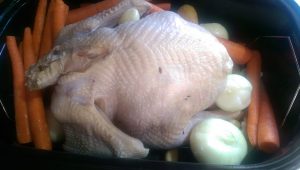 Scientific numbers tell us to set the cook time according the size of the bird, 20 minutes per pound. When using a roaster the time is greatly reduced.

This 25 pound turkey will be cooked for roughly 3 hours.

If this bird were cooked in the oven it would take roughly 8.3 hours. The roaster keeps the space, steam and heat quarantined which greatly reduced cook time – just like a turkey bag.

The internal temperature of the bird must be 165 degrees when a meat thermometer is inserted into the breast of the bird. When the turkey is cooked, lift it out of the roaster and let it sit on a large platter for 15 minutes before carving so the juices saturate the muscle tissues. While the turkey is resting – make the gravy! 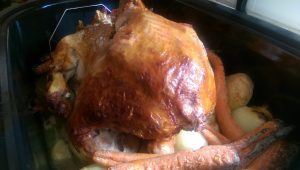 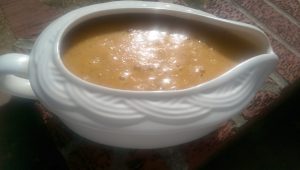 Homemade Soap - A Clean Way to Get Clean