Microwave popcorn producers have lost millions of dollars due to the dangerous health affects of their product, yet there are alternatives.

GMO popcorn does not currently exist on the market and in fact can grow right next to Roundup Ready and Bt field corn and the two will not pollinate. Popcorn is dent-sterile meaning it can’t be pollinated by other varieties. Oklahoma State University Division of Agricultural Sciences and Natural Resources says, “Pollen from other corn does not have any affect on the popping ability of popcorn hybrids.”

The University of Wisconsin and the University of Minnesota both say in their field manuals, “Nutritionally, it is one of the best all-around snack foods, providing 67% as much protein, 110% as much iron and as much calcium as an equal amount of beef. An average 1.5-ounce serving of popcorn supplies the same energy as two eggs; and a cup of unbuttered popcorn contains less calories than half a medium grapefruit.”

[amazon-element asin=”B007BDLAU8″ fields=”lg-image” ]Jeffery Smith, a well known GMO expert and executive director of the Institute for Responsible Technology spoke at the Seeds of Doubt conference in 2012 where he said almost 90% of the corn grown and eaten in this country is GMO corn. However, popcorn is from a different seed, one not yet genetically modified.

Still microwave popcorn is not food.

Popcorn is heavily treated with, “Insecticides, herbicides, fungicides, soil fumigants, products for structural treatment, and miscellaneous products (growth regulators and nitrogen stabilizers),” as stated in the 2013 Popcorn Agri-Chemical Handbook. Surprisingly the handbook sites restrictions in, “How soon popcorn can be planted following the application of a herbicide.”

To recap, popcorn seeds can be planting immediately or shortly after herbicide treatment but in order for soil to produce organic popcorn it needs to not be treated with chemical for 1,095 days.

Partially hydrongenated soybean oil – soy not only contains Roundup within the seed itself, it suppresses the thyroid and pancreas but also has a trypsin inhibitor which stops the digestion of protein and stunts growth.

Salt – packaged products are made with salt that involves the use of aluminum, ferro cyanide and bleach, which are all toxic. These products are on the EPA list as toxic material for human consumption. Mineral salt is a different product and should be consumed.

Modified cornstarch – comes from corn plants that are Roundup Ready. It is then altered chemically so that it dissolves quickly before it serves as a thickener. It is often supplemented with wheat, potato, rice, or tapioca.

Natural flavor – there is currently no regulation on the term natural flavor. Contrary to its image, it is not naturally occurring in nature. It is not a product made by God as food for us to eat. Instead it is a conglomeration of chemicals that collectively make the product taste as it should naturally. Often times it involves MSG.

Yellow 5 and 6 are both known to cause problems triggering allergies according to the Center for Science in the Public Interest.

Propyl gallate prevents food from going rancid through oxydaiton and has been found to cause thyroid, brain, preputial gland, pancreatic and adrenal cancer in rats as well as prostate inflammation. 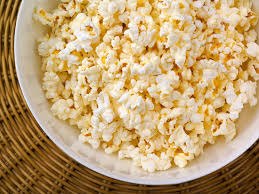 One year ago Wayne Watson, from Denver, won $7 million in a court settlement over microwave popcorn. Mr. Watson suffered from damaged lungs due to inhaling noxious microwave popcorn fumes. He ailment is considered “butter lung” or “popcorn lung.” It took years of consuming roughly two bags daily of the microwave popcorn before Watson was diagnosed with a respiratory issue.

The main argument was diacetyl, the ingredient giving the popcorn the flavor of butter was causing the man’s illness. In addition to the ingredients of the bag, experts said the likely cause was inhaling the fumes from chemicals coating the popcorn bag. These chemicals, Perfluoroalkyls, perfluorooctanoic acid (PFOA) and perfluorooctane sulfonate (PFOS), are not food ingredients. Instead they make the bag fire resistant and keep the oil contained in the bag. Perfluorooctinoic acid (PFOA) appears after the bag is heated. The US Environmental Protection Agency (not the Food and Drug Administration) labeled  PFOA a “likely carcinogen.”

Dr. Joseph Mercola says, “When heated, these compounds leach into the popcorn; when ingested, they show up as blood contaminants.”

These chemicals are referred to as “gender-bending” as they disrupt the endocrine system and sex hormones. This disruption causes, “Developmental and reproductive risks to humans,” according to Mercola.

One study printed in Human Reproduction divulges how PFOA and PFOS causes a drastic increase in infertility. Another study in the same journal showed PFOA negatively affecting the thyroid. A study with rats showed PFOA caused liver, pancreas, testicular, and mammary gland tumors.

Diacetyl was removed from the product after it was connected to lung issues in popcorn plant workers. Prostate cancer rates also grew in the popcorn plant staff.

Other lawsuits similar to Wayne Watson’s have been filed. Reports show settlements have totaled over $100 million as of 2010.

Popcorn remains a healthy snack when it popped with a good quality oil (bacon fat, lard, coconut oil or peanut oil) organic kernels and topped with good quality grass fed butter and mineral salt. Click on these products for a healthy alternative to microwave popcorn. Your tongue will be so happy it’ll jump out of your mouth and slap your eyeballs!